During the 1992 World Cup, Arjuna Ranatunga led Sri Lanka's successful chase of 313 against Zimbabwe, the first time a 300-plus score was chased down in ODIs.

In the build-up to the 2019 ICC Cricket World Cup, CricketCountry brings to you the most memorable moments and matches from the Cricket World Cup right from its first edition, way back in 1975. With 73 days to go, in our latest World Cup Countdown, we recall how Sri Lanka pulled off the first ever ODI chase in excess of 300 during the 1992 edition.

Clashes between lesser sides often do not draw attention, but more often than not they turn out to be enjoyable contests. When Sri Lanka, the latest side to be inducted to Test cricket, and Zimbabwe, yet to play a Test, clashed in World Cup 1992, the match was scheduled at the obscure but picturesque Pukekura Park in New Plymouth.

The match did not attract a big audience (the estimated turnaround was a mere 3,100). One of the sides – next to a street – was guarded by a long hedge. The boundaries were short. The pitch was absolutely flat, devoid of any grass. Banking on the strong, explosive Sri Lankan batting, Aravinda de Silva put Zimbabwe in.

Debutant openers Andy Flower and Wayne James got off to a solid start. James began fluently, pulling Kapila Wijegunawardene for four and following it with a lofted off-drive. De Silva brought on Pramodya Wickramasinghe, and met with success: James went for a flashing cut, only to edge it to the gloves of Hashan Tillakaratne. Flower cut Asanka Gurusinha to bring up the first boundary to his career, but Andy Pycroft struggled to score runs. He eventually holed out to Champaka Ramanayake at wide mid-on.

The big wicket followed soon: Dave Houghton tried to steer Gurusinha, but Tillakaratne moved quickly to his right and came up with a catch. Zimbabwe were 83 for 3 in the 20th over and were certainly not looking to put up a substantial score.

It was at this stage that Kevin Arnott walked out and took charge. Sanath Jayasuriya(with a substantial crop of hair on his head) was dismissed with ease by both men: a leg-glance from Flower (that went so fine that only a long-stop could have stopped it) stood out. Arnott accelerated further, cutting Ruwan Kalpage for four,

Flower, having changed to a sun-hat, duly brought up his fifty with a soft push to short cover. Arnott joined in the fun too, slogging Kalpage through mid-wicket to bring up his fifty, but fell shortly afterwards: he tried to steer Wickramasinghe, but Tillakaratne came up with a diving catch. The score read 167 for 4; it was the 37th over; let alone 300, even 250 looked tough.

A bareheaded Andy Waller walked out and immediately bludgeoned one through cover for four. Ramanayake bowled short, and Waller hooked and cut him brutally for fours. Meanwhile, Flower flicked Ramanayake from outside off to bring up a hundred on ODI debut. Flower was the third batsman (and the first in 14 years) to achieve this feat. He also remains the only batsman to score a hundred on ODI debut in a World Cup.

Waller, meanwhile, brought up his fifty in 31 balls, and, to quote a few contemporary commentators, threw the kitchen sink when Gurusinha pitched one up to him. The ball soared over the stands and landed in the trees. De Silva got Wijegunawardene to bowl the last over; the first ball went over fine-leg once again into the trees.

He was dropped at long-off; bowled off a no-ball; nearly took out umpire Steve Woodward with a straight drive; and Zimbabwe finished on a seemingly unassailable 312 for 4. Flower s unbeaten 115 had taken him 152 balls, but Zimbabwe would certainly not have gone past the 300-mark, had Waller not scored a 45-ball unbeaten 83.

It was a daunting task. Less than two years back New Zealand had scored 298 for 6 to beat England at Headingley, but that was a 55-over match. The 50-over record, also held by New Zealand against England, was 297 for 6 at Adelaide Oval in 1982-83. The World Cup record, of course, was West Indies 276 for 3 against Australia at Lord s in 1983. Sri Lanka would have to break multiple records to reach there. They also had to deal with Zimbabwe s exceptional fielding.

The experienced Roshan Mahanama and the muscular Athula Samarasekera got the Lankans off to a fine start. Samarasekera biffed Eddo Brandes through square-leg and Malcolm Jarvis past mid-off, while Mahanama exhibited characteristic wristwork to keep the tempo going.

Houghton brought the debutant Kevin Duers on, but Samarasekera went after him immediately, taking him for three boundaries in his first over. Brandes was not spared either, and with 61 after 9 overs, Sri Lanka were well on track. Samarasekera had scored 45 out of these runs with the help of 9 boundaries.

His fifty came up the next over with two boundaries off Duers. Mahanama was happy to give him the strike, but did not spare the loose deliveries. Houghton eventually turned to John Traicos for the breakthrough: he obliged, having Samarasekera caught at long-off. He had scored 75 (50 of which had come in boundaries) from 61 balls; it was probably the innings of his life. The openers had put up 128 in a shade above 21 overs.

Brandes struck soon afterwards as Mahanama hit one hard to Arnott at short cover; Gurusinha edged one to the vacant gully and ran, only to be sent back by Aravinda and fall short; Aravinda himself was foxed by a slightly slower one, giving Houghton an easy catch at wide mid-on. Sri Lanka were 169 for 4 after 34 overs: they needed a further 144 from 96 balls.

Arjuna Ranatunga had started off by sweeping Traicos for four. He was now joined by Jayasuriya, who responded with a short-arm jab over deep mid-wicket into the stands an indication of what was to follow in the next World Cup. The next six flew over long-on.

A desperate Houghton brought himself on, and Jayasuriya, tried to go for the slog sweep, fell for the lack of pace. Flower ran for yards, coming up with the catch at square-leg. Ranatunga, however, was not to be contained: the batsmen had crossed, and he dispatched Houghton past square-leg, followed by a delicate sweep, for consecutive boundaries, and followed with another through point in the same over.

Tillakaratne rose to the challenge as well, lofting Jarvis into the stands over cover. Ranatunga responded with a six off Iain Butchart, clearing deep mid-wicket, but Jarvis had his revenge: he brought one slightly back to clean bowl Tillakaratne. They needed 40 from 5 overs, but Arjuna was running out of partners. Would Kalpage be able to hold up one end?

He did. Not only did he provide Arjuna with the strike, he also lofted Butchart over his head for four. Arjuna and Kalpage took the score to 298 at the end of 48 overs: they needed 15 from 12 as Brandes ran in.

Ranatunga settled things very quickly. He shuffled across ever so slightly, leg-glancing to obtain a boundary off the first ball of Brandes over. The next ball was a tad outside off: this time Ranatunga brought out late-cut, wide enough to evade Flower s diving effort. He would play an encore to finish off another World Cup in four years time.

When Sri Lanka required 4 from 7 balls, Kalpage probably wanted his share of glory, trying to clear the point boundary but only found the waiting hands of Houghton. It had perhaps come too late in the day, but it was a wicket nevertheless. What if Jarvis could get Arjuna at the other end?

They could not. Arjuna flicked one past square-leg to bring up the winning run. As the neutral spectators flocked on to the ground, Arjuna and Ramanayake ran back to celebrate the historic win with their teammates. Record chases, after all, do not happen that often.

With a 61-ball unbeaten 88, Ranatunga was the undisputed choice for the Man of the Match award, but the adjudicators decided to give it to Flower. 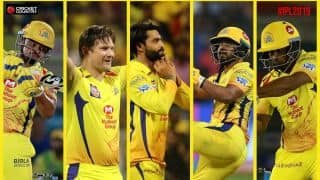