1996 was the year the pinch-hitters really seized their opportunity and the third umpire made an appearance.

In the build-up to the ICC Cricket World Cup 2019, CricketCountry brings you the most memorable moments and matches from the tournament over the years – right from its first edition, way back in 1975. With 13 days to go, in our latest World Cup Countdown we recap the sixth edition of the tournament, held in 1996.

This will forever be remembered as the World Cup where Sri Lanka shed the tag of minnows and took the global stage by storm. Along the way there were several highlights that proved the Lankans were not at the highest level to merely make up the numbers, none more exhilarating than Sanath Jayasuriya laying into new-ball attacks, and at the end of it all the endearing success of Arjuna Ranatunga’s champions overcome the controversies that marred the Wills World Cup.

The tournament was embroiled in several disputes even before it began. In Sri Lanka, a bombing by the LTTE just before the event, resulted in the death of 90 people. As a consequence, Australia and West Indies refused to travel to Colombo for their league matches, citing security concerns, and that resulted in full points for Sri Lanka as the ICC awarded the hosts both matches on grounds of forfeit.

Another controversy occurred during the semi-final between India and Sri Lanka at Eden Gardens. The misbehaviour of spectators forced the match referee Clive Lloyd to award the match to Sri Lanka. In the final, played in Lahore, tensions between Australia and Sri Lanka heightened after umpire Darrell Hair called Muttiah Muralitharan for a suspect bowling action.

A changed format led to the inclusion of three teams – Kenya, Netherlands and the UAE – and an extra round, the quarter-finals. The format was not widely applauded, with critics, including players, questioning the logic of changing the successful 1992 format, a round-robin producing the top four teams. In 1996, the teams were put into two groups of six, from which eight progressed to the knock-out stage. Quite obviously, Zimbabwe and the three minnows were eliminated.

The lingering feeling was that the Wills World Cup could have been far more competitive had the previous system been persisted with.

India and Pakistan were once again expected to go far but neither was consistent enough. India lost to Australia and Sri Lanka in the league stage, rallied to make the quarter-finals, beat Pakistan in another Indo-Pak epic, but came undone against Sri Lanka in a crowd-marred semi-final. South Africa were the clear favourites after five clinical victories in the group stage but came up against Brian Lara in the quarters; similarly, New Zealand were outdone by a classy Mark Waugh century at the same stage.

England were horrible, losing all three of their games against Test nation and struggling to beat the Netherlands.

The 15-over fielding restriction rule had made its debut in 1992, but 1996 was the year the pinch-hitters really seized their opportunity and it was Sri Lanka, Australia and India who exploited the wide open spaces with aggressive early batting. The 1996 World Cup also saw the third umpire make his first appearance in front of the TV monitor.

Nonetheless, the Lankans went on to win the World Cup by seven wickets with more than three overs to spare, thanks to a brilliant century from Aravinda de Silva. Australia had played well to reach the summit but took their eyes off the ball when it came to play Sri Lanka in a super-charged night in Lahore. No player had dominated a World Cup final to the extent that de Silva did: he took two catches and three wickets, including Australia’s top-scorers, and capped a glorious night with an unbeaten 107. 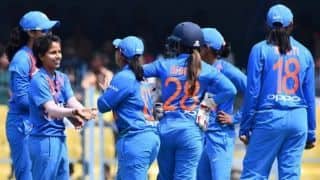 India women team is going to be a force in world cricket: Matthew Mott Video: Most dismissals by wicketkeepers in each edition of World Cup