Prudent Insurance Company, the tournament sponsors, pumped in 100,000, including 9,000 in prize money.

In the build-up to the ICC Cricket World Cup 2019, CricketCountry brings you the most memorable moments and matches from the tournament over the years right from its first edition, way back in 1975. With 18 days to go, in our latest World Cup Countdown we give you a history of the first World Cup back in 1975.

Just four years from the time the first limited-overs international was held at the hallowed Melbourne Cricket Ground, the inaugural World Cup, known as the Prudential Cup, marked the debut of the premier one-day international (ODI) tournament.

Prior to the tournament, there had only been 18 ODIs played in four years since the format was introduced. Of those, England had appeared in over two thirds. West Indies, Pakistan and India had appeared in only a handful of games between them. For comparison, the 18 World Cup matches in England between June 7 and June 21, 1975 and contested between eight teams and won by West Indies, the most outstanding performers of the tournament.

There were eight participating countries: Australia, England, India, New Zealand, West Indies, Sri Lanka, Pakistan, and East Africa (composed of players from Kenya, Tanzania, Uganda and Zambia). A notable omission from the tournament was the South African cricket team who were not competing due to the international sports boycott.

Considering that only 18 ODIs had been played in four years, there was little form to go by. West Indies were favourites considering their aggressive nature suited the one-day format and that so many of their squad had excelled in county cricket. Australia and England had solid sides, and Pakistan were bristling with a fearsome line-up.

The Prudential World Cup had matches consisting 60 overs per side. The preliminary matches were played in two groups of four teams and they initially played league matches within their groups. The top two teams from each group played the semi-finals, and the winners of these played the final. In all, 15 matches were played.

Unlike today, players wore a traditional white uniform and red balls were used. There were also no night games.

England had few difficulties, overcoming a dazed India in the tournament opener and then seeing off New Zealand thanks to a century from Keith Fletcher. In the other group, a much tighter one, West Indies, Australia and Pakistan squared off for a place in the semi-finals with Sri Lanka, at the time only an Associate member. A Dennis Lillee-inspired Australia knocked off Pakistan, who then had West Indies eight down with 80 still required, only to look on as the last-wicket paired sealed an extraordinary match.

The semi-finals were played between England and Australia and New Zealand and West Indies. In the final played at Lord s, West Indies beat Australia by 17 runs. Clive Lloyd, the West Indies captain, was declared the Man of the Final for an outstanding 85-ball 102.

The tournament was a success both on and off the field. Thousands of spectators thronged the eight venues in fine weather to help the organisers collect 188, 598 from gate money. Prudent Insurance Company, the tournament sponsors, had pumped in 100,000, including 9,000 in prize money. 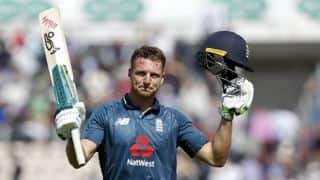