Ramnaresh Sarwan threatened to take West Indies over the line, but Vaas turned matters around.

In the build-up to the 2019 ICC Cricket World Cup, CricketCountry brings to you the most memorable moments and matches from the tournament over the years right from its first edition, way back in 1975. With 44 days to go, in our latest World Cup Countdown we rewind to the 2003 World Cup and a match in which Sri Lanka pipped West Indies by six runs.

A place in the Super Eights of the World Cup beckoned for Sri Lanka and West Indies when they met at Newlands on February 28, 2003.

Sanath Jayasuriya won the toss and chose to bat, but matters did not go as planned. The early loss of Marvan Atapattu for 3 was followed by West Indies’ bowlers keeping a check on Jayasuriya and Hashan Tillakaratne.

Jayasuriya was unnaturally subdued in making 66 off 99 balls, with only four boundaries. Tillakaratne ate up 68 deliveries for his 38. And with Aravinda de Silva (13) and Mahela Jayawardene (9) failing, Sri Lanka were in trouble at 139/5 in the 36th over.

Then Vaas took two wickets with the new ball, getting Wavell Hinds playing across the line and Brian Lara nicking behind, to leave West Indies in trouble. Chris Gayle’s 55 helped lead the recovery but a sickening blow to the helmet to Ramnaresh Sarwan from a Dilhara Fernando delivery sent the batsman off the field, carried by paramedics.

Once Gayle was dismissed, a wobble ensued. Shivnarine Chanderpaul held up one end with a fighting 65 off 90 balls, but when he was dismissed West Indies needed 60 runs from 47 deliveries. Bravely, Sarwan returned to bat and proceeded to frustrate Sri Lanka with 47 off 44 balls.

Jayasuriya rotated his bowlers and wickets fell, but Sarwan threatened to finish the chase. With 29 needed off the last three overs, Jayasuriya chose to bowl de Silva and that over cost 13 during which Atapattu dropped Sarwan at backward square leg. Just two runs were conceded by Muttiah Muralitharan in the 49th over, which meant that West Indies had to get 14 runs off the last over.

Pulasthi Gunaratne did the job by conceding only seven runs, and Sarwan was left not out.

Vaas was named Man of the Match for his 4/22 in ten overs, which also made him the leading wicket-taker of the World Cup with 16. 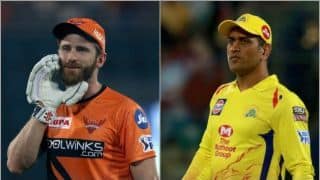 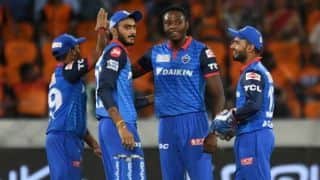