We rewind to March 4, 2011, when the public of Bangladesh, in a display of anger, accidentally targetted the West Indies team bus.

In the build-up to the 2019 ICC Cricket World Cup, CricketCountry brings to you the most memorable moments and matches from the tournament over the years right from its first edition, way back in 1975. With 25 days to go, in our latest World Cup Countdown, we rewind to March 4, 2011, when the public of Bangladesh in a display of anger, accidentally targetted the West Indies team bus.

During the 2011 World Cup, Bangladesh were embarrassed by the West Indies, who skittled them for 58, the lowest-score by a Test playing nation in a World Cup. If that wasn t humiliating enough, in a common display of outburst from the Bangladesh public in Dhaka, a section of crowd accidentally stoned the West Indies team bus, believing it belonged to Bangladesh.

Shakib Al Hasan batted first, after which Tamim Iqbal nicked to Darren Sammy. Sammy brought himself on in the fourth over and had Imrul Kayes caught-behind off his second ball; little Mushfiqur Rahim was caught at short mid-wicket; Siddique hit two more boundaries before Roach unleashed a yorker that crashed on to his boot. Siddique went for the review, but in vain.

Roach was replaced by Benn after a 5-over spell, and the ploy worked: Shakib, rooted to the crease, played down the wrong line as the ball spun into him and hit timber. Raqibul Hasan edged one from Sammy; Benn found Naeem Islam s edge with an excellent flighted delivery; and once Roach came back to replace Sammy he removed Ashraful first ball, playing an expansive drive and edging to Devon Thomas in the process.

Benn rounded things off by having Shafiul Islam caught at gully and yorking Rubel Hossain in the space of three balls in the next over. Bangladesh were bowled out for 58 in 18.5 overs, with only Siddique (25) and Ashraful (11) reaching double figures.

Gayle finished things off with a whopping 226 balls to spare. He set about the chase with two fours in Rubel s second over. Naeem had Devon Smith beaten in flight and bowled, but it was never going to be a challenge. Gayle and Darren Bravo took their time, and reached the target in the 13th over. Bangladesh used six bowlers, but surprisingly Shakib came on only when the scores were level.

The spectators were livid. Bangladesh is known for their mercurial fans, and it was only expected that they would erupt. They stoned the team bus, but unfortunately they did not realise that they had chosen the wrong bus to go after. The poor West Indians, who were possibly celebrating after an easy victory and a half-day at work, were not amused. Chris Gayle was vocal on Twitter almost immediately.

Fortunately, the West Indians returned to the hotel unharmed, though two window panes were cracked by the stones thrown at them. 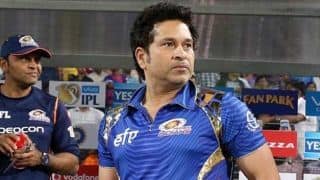 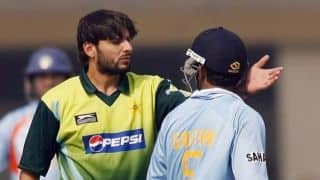