On March 17, 2007, South Africa s Herschelle Gibbs became the first man in the history of international cricket to score six sixes in an over.

In the build-up to the 2019 ICC Cricket World Cup, CricketCountry brings to you the most memorable moments and matches from the tournament over the years right from its first edition, way back in 1975. With 32 days to go, in our latest World Cup Countdown, we rewind to March 17, 2007 when South Africa s Herschelle Gibbs became the first man in the history of international cricket to score six sixes in an over.

Even with the increasing advent of T20 cricket, six sixes in an over is something people don t get to hear about often. Sir Garfield Sobers became the first man to achieve this rare feat back in 1968 in First-Class cricket. Ravi Shastri, currently serving as the coach of the Indian cricket team followed next, hitting six sixes in an over in a Ranji Trophy match for Bombay against Baroda in 1985.

So when in 2007, Gibbs became the first player to smoke six sixes in an over in international cricket, it was considered an achievement of epic proportions. Doesn t matter it came against minnow Namibia, it was still a big deal considering it had come during the World Cup.

Here s how it panned out. The Netherlands chose to field first in a surprising move. Owing to rain, the game was reduced to 40-over-per-side, since according to the tournament rules, the reserve day could be used only if there was no possibility of play, or if a minimum of 20 overs in both innings was not a certainty.

Despite losing AB de Villiers in the first over, Graeme Smith and Jacques Kallis came together to put up a century stand (114) in under 20 overs. Gibbs walked out to bat at the fall of the captain’s wicket. He started off cautiously, steering the ball into the gaps and putting the loose ones before finally getting steam.

Gibbs’ moment arrived in teh 30th over, bowled by part-time legspinner Daan van Bunge, and then the below happened

First six: van Bunge pitches it full and Gibbs treats it with disdain. He steps out of the crease and sends the ball sailing over long on for a biggie.

Second six: Pitches on leg, but Gibbs makes room to smash it over van Bunge s head. The ball thuds into the sight screen before wearily rolling back onto the field.

Third six: Fuller, quicker on the off stump, but Gibbs is quick to club it over long off, despite it uncharacteristically being an off-break. While warning signs become more ominous for van Bunge, the latter mildly acknowledges his fifty, scored in just 33 deliveries.

Fourth six: Having obviously been stirred by a barrage of maximums, van Bunge bowls a knee-length full toss that is hoisted over deep mid-wicket by Gibbs.

Fifth six: van Buinge pitched it short and flat. Gibbs stayed put at the crease, and a short, slow turning delivery that greeted him was swatted straight over the ropes. He was on the brink of making history.

Sixth six: A shocker from van Bunge, which was rightly pummelled by Gibbs over deep mid-wicket again. Short boundaries notwithstanding, this momentous six would have cleared most grounds in the world. The South Africans, watching the proceedings from the pleasant confines of the pavilion, went berserk; like the World Cup had already been won. Nevertheless, it was an apt reaction to the carnage led by one of their own.

Gibbs had moved to 68 from just 36 deliveries and, he would score one more four of the following over before being caught for 72. South Africa posted a massive 353 for 3 with Kallis top scoring with a century and Gibbs etching his name in the history books. In reply, the Netherlands finished on 132 for 9 in 40 overs, gifting SA the game by 211 runs. 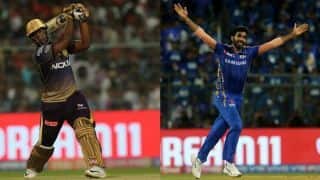 KKR vs MI, IPL 2019, LIVE streaming: Teams, time in IST and where to watch on TV and online in India 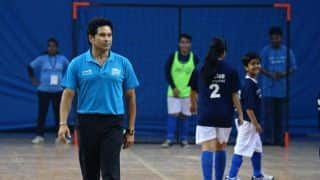