We revisit the 2003 World Cup final, in which Australia trounced India by 125 runs to be crowned three-time world champions.

In the build-up to the 2019 ICC Cricket World Cup, CricketCountry brings to you the most memorable moments and matches from the tournament over the years right from its first edition, way back in 1975. With 36 days to go, in our latest World Cup Countdown, we revisit the 2003 World Cup final, in which Australia trounced India by 125 runs to be crowned three-time world champions.

In 2003 came undoubtedly one of India s best World Cup performances. From a low key start an far from comprehensive win against the Netherlands and a heavy defeat against Australia Sourav Ganguly s India rose from the ashes and dished out strong performances to reach the World Cup final for only the second time. But standing between them and a second world title were the mighty Australia, who smashed India’s 20-year-long wait of a World Cup with skipper Ricky Ponting leading the way with a terrific hundred in the final.

Ganguly, on a belter of a surface in Johannesburg, surprisingly chose to field after winning the toss, and as it turned out, paid the price for it. Australia piled a mammoth 359 for 2 the then-highest score in a World Cup final, led by Ponting s 140 and Damien Martyn s 84-ball 88.

India seemed out of it from the moment the first ball was bowled. Zaheer Khan sent down a wide and gave away 15 runs in the opening over. There onward, it was carnage. Openers Adam Gilchrist and Matthew Hayden were the only two Australian wickets to go down after putting a century-plus stand to Harbhajan Singh. Barring that however, India bowlers had nothing to show with frontline seamers Javagal Srinath and Zaheer Khan bleeding 154 runs in 17 overs combined.

At 125 for 2, India would have breathed a sigh of relief with both openers gone. But Ponting and Martyn batted like a million bucks and what transpired there onward established itself as stuff of legends. The pair punished the Indian bowling attack and forged an unbeaten 234-run partnership. Martyn took 46 balls to reach his fifty; Ponting 74, and from there, the Australian skipper exploded. His next 50 runs came off 28 balls. Ganguly tried ever options Sachin Tendulkar, Dinesh Mongia, Virender Sehwag, Yuvraj Singh, but none was spared.

India s hopes of down such a colossal total rested heavily on the shoulders of Tendulkar, who had tallied 669 runs in the tournament so far. Tendulkar got off the mark with a boundary but perished next ball to Glenn McGrath. Chasing 360 and tasked with a stiff asking rate of over seven an over, Sehwag cut loose and somehow in the company was Ganguly, kept India in the chase as the pair put on a 54 off 54 balls. With no option but to go for it, Ganguly hit four and six off the first two balls of McGrath s next over, and Sehwag hit another six off the last ball.

The 20-odd minutes of entertainment came to an end when Brett Lee had Ganguly with a bouncer, and when Mohammad Kaif departed for a blob next ball, at 59 for 3 it seemed all over for India. But hopes arrived in the form of rain, and Rahul Dravid. As it started drizzling Ponting brought Brad Hogg and Darren Lehmann on to rush through the 25-over mark; Sehwag greeted these bowling changes gleefully, smashing three consecutive boundaries off Lehmann.

But unfortunately for India, the skies cleared, and play resumed. Sehwag continued with his onslaught but was run out for 82 off 81 balls courtesy a direct hit to become India s top scorer. Dravid fought for 47 before chopping on a ball from Andy Bichel. The middle order of Yuvraj, Mongia couldn t keep on, and McGrath returned to clean up the tail to finish with 3 for 52. India were bowled out for 234 in 39.2 overs, as even with that score, Australia had capped off a comprehensive win to be crowned three-time World champions. 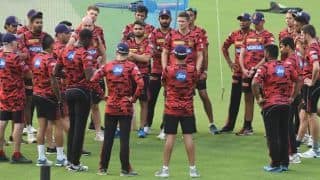 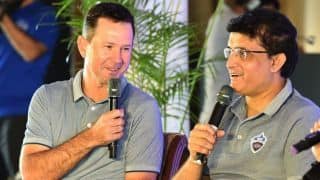