In the build-up to the 2019 ICC Cricket World Cup, CricketCountry brings to you the most memorable moments and matches from the tournament over the years – right from its first edition, way back in 1975. With 42 days to go, in our latest World Cup Countdown we rewind to the epic clash between Shane Bond and Brett Lee.

The 2003 ICC World Cup showdown between Australia and New Zealand saw an epic clash between two of the fiercest pacers of their eras – Brett Lee and Shane Bond who terrorised batsmen, playing the decisive roles in their respective team’s performances.

New Zealand captain Stephen Fleming won the toss and opted to field. And Bond was unleashed straight away but he conceded seven in the opening over. At the other end, Adam Gilchrist smashed Andre Adams for two fours with the defending champions 16/0 after 2 overs.

That was that as Bond blew away their top-order. Matthew Hayden was out caught-behind, Gilchrist was trapped leg-before and Ricky Ponting went for an expansive drive and ended up edging it. Australia were left reeling at 31 for 3.

Fleming gave Bond a breather and made Adams change ends. It worked immediately as Darren Lehmann edged one to gully. There was a brief resistance between Damien Martyn and Michael Bevan before Fleming brought Bond back. Once again Bond struck; all Martyn managed to do was edge the snorter.

A toe-crusher got rid of Brad Hogg putting Bond on the verge of a hat-trick. Ian Harvey survived the hat-trick delivery, his middle-stump was soon pegged back by Bond. Australia were in tatters at 84 for 7 in the 27th over. And Bond’s figures read 8.3-1-21-6.

Bevan and Bichel began the rescue act. Bevan scored a mere 36 (he fell for 56) in the stand to Bichel’s 56. Bichel himself fell for 64 in the last over, but the damage had been done. They finished on 208 for 9.

New Zealand promoted Vettori to open alongside Fleming. The ploy did not work: Vettori managed a boundary (and a five, thanks to overthrows), but flashed at one outside off, and McGrath drew first blood. Three balls later Nathan Astle fended one to slip, and when McGrath removed Scott Styris, the score read 33 for 3 in the 7th over.

Cairns began with two fours from the first four balls he faced. Fleming played out a maiden to Lee at the other end, and Cairns smashed McGrath for six in the next over. With Fleming also joining in with three boundaries, New Zealand raced to 63 for 3 after 11 overs. Lee had to be taken off after conceding 31 off 5 overs.

Ponting quickly switched to Bichel and Harvey. Cairns, trying to clear the boundary off Bichel, holed out to deep third man; and though Fleming kept the counterattack going, Lou Vincent edged one off Harvey to slip with the team score on 84 for 5.

New Zealand still needed 125, but Fleming was on a rampage.

Fleming and Harris another 18 before Lee struck. Fleming went after a short delivery only to edge it to Gilchrist; a yorker got McCullum LBW; Oram fished for a thunderbolt first ball that crashed on to the stumps; Adams was bowled by a yorker that was too fast for him; and poor Bond, going for a desperate wild slog, mistimed and gave Lee a diving return catch.

Lee, expensive in the first spell, came back to finish things off with 5 for 3 from 14 balls. New Zealand lost their last 5 wickets for a mere 10, to be skittled for 112. 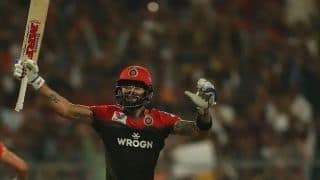 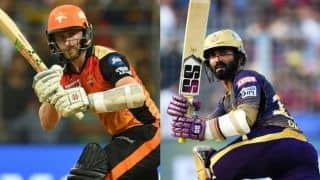