Pakistan all-rounder Yasir Arafat presents his analysis of the recently concluded first Test between Pakistan and England whilst looking ahead to the second Test in Dubai.

Pakistan all-rounder Yasir Arafat, in his debut blog on PakPassion.net, presents his analysis of the recently concluded first Test between Pakistan and England whilst looking ahead to the second Test in Dubai, and explains why Mohammad Amir needs to play a full season of domestic cricket before being considered for a role in the national team.

The mental aspect of playing on Abu Dhabi type pitches

Pakistan must be breathing a sigh of relief after their near miss in Abu Dhabi and regardless of the drama on the final day, as a fast bowler I can tell you that bowling in those conditions is not an easy task. Not only do the fast bowlers have to come to terms with dead tracks, but they also have to learn to deal with the extreme temperatures in the UAE which in these months can get up to 40°C during the day. This is tough for the fast bowlers but remember, the spinners suffered as well, with the first spinner taking a wicket towards the end of the second day. In England’s innings, six of the wickets were picked up by the fast bowlers. So all in all, it was very depressing to see such a wicket with little help for the bowlers except, of course, on the last day.

While there is understandable criticism of the pitch in the way it offered no assistance for the fast-bowlers, I would like to mention Wahab Riaz’s excellent effort during this match in which he was reverse swinging the ball at will. We all saw that one spell he bowled to Ben Stokes but if you look at his overall effort, you will see that he bowled around 90mph throughout which given the circumstances was really impressive. He bowled his heart out in the first innings with 37 overs for 125 runs which may not sound too good but he is an attacking bowler and runs don’t matter as long as he is taking wickets which he did for Pakistan.

Of the other bowlers, Rahat Ali is a wicket to wicket type bowler who can swing the ball as well. Obviously on this wicket he wasn’t as successful. I am convinced that if the conditions were even a little more helpful for swing, Rahat would have been a handful with the new ball. Imran Khan is also not dissimilar but the difference is that he moves the ball off the wicket instead of being a swing bowler. He bowls with a lot of energy but once again on this wicket he wasn’t that effective. Even Stuart Broad and James Anderson were bowling with the keeper up which is an indication of the pace of the pitch. Contrast this to a few months ago when Stuart Broad was bowling in the Ashes and was unplayable due to his speed – in Abu Dhabi the keeper was standing up to the stumps. This, I believe, is embarrassing for cricketers and is no fun for spectators either. One can only hope that the situation will be different in Dubai.

So given that the pitch was termed as flat as a road for most of this Test match, what transpired for the match to have such a dramatic final day? In my view, this was just a consequence of pressure. When you are batting to draw the match on the fifth day, the batsmen tend to come under stress as it is difficult to decide whether to play defensively or to attack. The Pakistan batsmen were defending a lot and they had some bad luck as well, especially in the case of Shan Masood. Even the delivery which accounted for Malik was an awkward one. We then witnessed an excellent partnership between Misbah-ul-Haq and Younis Khan but it appears that they had a lapse in their concentration and played some uncharacteristic shots to lose their wickets at a crucial time. It looked as if they assumed that the match was safe and they had done their part and relaxed a bit. But from experience, we know we should never make such assumptions. The Pakistan tail then collapsed quite badly with very few runs scored by the last five batsmen which compounded Pakistan’s misery.

Hindsight is a great thing but one question that does come up is whether with the absence of Yasir Shah, Pakistan went into a defensive mode for most parts of the game. I don’t subscribe to that theory. The number of runs scored by us in the first innings shows that the absolute opposite was true. All that happened was that in the second innings, we showed some lack of application and commitment and we almost paid the price for that attitude. To be fair, there was hardly any spin on the track until the fourth day and in terms of our bowling, we really had no attacking options apart from Wahab Riaz.

Looking ahead to Dubai

One cannot ignore the fact that England will go into the second Test with a huge morale boost after their performance in Abu Dhabi. From Pakistan’s point of view, Azhar Ali and especially Yasir Shah returning to the Pakistan team in Dubai will provide a big psychological boost. In terms of team composition, I would say that Shoaib Malik has pretty much assured his position and the axe will fall on Shan Masood due to his performance in the last game. It may appear unfair towards Shan but there is no other option even though we know that he is quite capable as he scored a match winning hundred in the Test series against Sri Lanka. In Malik’s favour, we can say that not only did he score that double hundred, he also took wickets as well which makes him an obvious pick for the Dubai Test. All said and done, Pakistan’s overall chances in the Dubai Test will revolve around Yasir Shah and of course on how conducive the pitch is to his type of bowling.

When should Mohammad Amir be selected?

Finally on to a topic which is being debated a lot in the media at the moment; the return of Mohammad Amir to international cricket. As someone who has played and trained alongside Amir in the recent past during the National T20 Cup in Pakistan, I feel that I am in a good position to offer my comments on this issue.

I feel that Amir needs to play a full season before any talk of a return to the international side is to be entertained. This will also get him ready for the World T20 in early 2016 as that will be the time when the domestic season would have ended. In my opinion, and contrary to what many people want, I don’t think he is ready to play in the next series. By playing a full season, he will become more accurate but above all, he will need to perform and stand out.

Another important aspect of his rehabilitation is his behaviour which he needs to keep in check. We all know about the recent incident involving Faisal Iqbal and himself where he was also reprimanded by the PCB and also warned by the Chairman. Amir needs to make sure that there is no repeat of this type of behaviour. I have seen him play for the Rawalpindi team in recent times and he is a brilliant bowler but if he can perform well and does not misbehave then he will surely bring great joy to Pakistan cricket and its fans in the future.

As for my plans in the upcoming months, I am hoping to play for KRL if they qualify for the First-Class tournament, if not that then I will be happy to play for my region Rawalpindi. In the meanwhile, I will also be keeping my options open to play in the Bangladesh Premier League.

(Yasir Arafat is a Pakistani cricketer who has played 11 One-Day Internationals and 3 Tests for his country. The above column was first published in PakPassion)
First Published on
Last updated on October 21, 2015 12:07 PM IST
TOPICS:
Wahab Riaz Yasir Arafat Opinions Pakistan vs England 2015 England tour of UAE 2015 Features 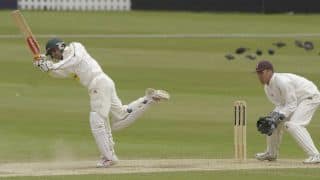