With the star spinner Saeed Ajmal out of the frame for the time being, it is turning out to be a tough time for Pakistan as they struggle to find a suitable replacement to fit in the current squad that earns them a sense of belief about their being a strong side in world-cricket. Ajmal’s absence was distinctly visible in the recently concluded three-match ODI series against Australia in UAE, which they lost miserably – 3-0. However, the recent inclusion of the spinner Yasir Shah has drawn the attention and curiosity of the cricketing fraternity about the spinner’s performance and his suitability as a replacement for Ajmal. Ayush Gupta looks into the performance of the spinner and his career so far in competitive and professional cricket.

Born on 2nd May, 1986 in Swabi, Khyber Pakhtunkhwa at Pakistan, Yasir was a cricket buff who made his debut in the first-class cricket when he was around the age of 16. Having played for teams like Khyber-Pakhtunkhwa Province, Sui Northern Gas Pipelines Limited, Abbottabad Falcons and Pakistan Customs, his breakthrough came in the season of 2010-11 when he claimed 16 wickets from four games. In addition, he took 13 wickets in the List-A competition, again in just four matches. It is during this phase, that he earned a call for the Pakistan-A team in 2011, when, during an unofficial ODI against Afghanistan, he claimed three wickets for just 29 runs.

Owing to his quality performance for the Pakistan-A team, he finally earned a call for the Pakistan national team on September 14 in an ODI against Zimbabwe at Harare where he claimed two wickets for 51 runs in 10 overs. He dismissed the opening batsman, Vusi Sibanda and the wicketkeeper-batsman, Tatenda Taibu. However, while playing two T20I against Zimbabwe on the same tour, he failed to claim a single wicket and ended up giving 31 runs off three overs in the first game and eight off just one over in the other game.

Thus, although his performance in the T20I has not been so impressive, he looked promising in the only ODI he played, where he claimed two wickets. However, it would be premature to offer any analytical comment on his performance, as the number of matches he has played so far is too less for anything significant to comment on.

However, looking at the last 10 games he played, inclusive of all the formats, certain conclusion could surely be drawn. Out of the 10 games he has played so far, eight are T20, out of which, his best performance came in the match against Lahore Lions – the Pakistan T20 champions of 2014, on 12 February, 2014 at Rawalpindi, where he claimed three for just 19 while playing for the Falcons. His next best comes against Bahawalpur Stags in Karachi on 22 September, 2011 where the stats read just one for 31, playing for the same team.

Overall, his stats off late are not as impressive as it should have been in order to be eligible for the Pakistan senior squad. However, owing to his good record in the domestic circuit so far, he may still get the chance for the senior team. If he is smart enough to convert these chances into golden ones, he could well turn out to be a possible replacement for Saeed Ajmal. 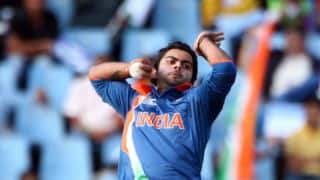 Virat Kohli takes wicket with the first (0th?) ball of his T20I career