Afghanistan topped their success in 2017 by winning 19 of 28 internationals.

How do you top your best year, in which you win multiple series and attain Test status? By having an even better follow-up year, winning 19 of 28 internationals, nearly reaching the final of the Asia Cup, making your long-cherished Test debut and completing the mother of all comebacks. That s how.

Asghar Afghan, the captain of Afghanistan, believes that his team would have been in the final of the Asia Cup had their matches been played in Dubai instead of Abu Dhabi. After the team bowed out with a memorable tie against India, the skipper stated that Afghanistan had sounded the warning bells to major cricketing nations.

It is a debatable statement, but one that underlines the strides Afghanistan made in 2018. They beat West Indies to claim the ICC 2019 Cricket World Cup Qualifiers in Zimbabwe – after losing three games on the trot – made their Test debut to mark a history occasion and despite not making the final of the Asia Cup, showed their strength as an ODI team well over a year since they were granted Full Member status. Beating Sri Lanka by 91 runs and Bangladesh by 136 runs and running each Super Four match into the last over underscores the threat Afghanistan pose, as well as the fact that winning the key moments remains huge a fact that Afghan said his team now realised.

They won all seven of their T20Is last year, highlighted by a 3-0 sweep of Bangladesh in Dehradun and soared on the success of Rashid Khan and Mujeeb Ur Rahman.

With more opportunities lined up in 2019, a year that includes the World Cup and more Tests versus Ireland, Zimbabwe, Bangladesh and West Indies, Afghanistan are heading into perhaps their most important year.

To beat Sri Lanka and Pakistan and tie with India in the Asia Cup was special, but securing passage to the World Cup was a massive achievement for Afghanistan. Their chances hung by a thread after losing three games in a row, but in a turnaround that ranks as one of the greatest in ODIs, Afghanistan stunned their critics by beating West Indies by seven wickets in the final in Harare.

“This is nothing but a miracle that we have won this tournament,” said Asghar. This is by far Afghanistan’s greatest victory. Beating the mighty Windies in the final of a tournament which is no less than a mini-World Cup, is something like a dream come true for all of us. If we have come this far in 10 years, I leave it to you to decide where we can be in the next 10 years.”

Losing to Hong Kong in Bulawayo during the ICC World Cup Qualifiers was a severe dent to Afghanistan s chances of quailing for the quadrennial event. Set a target of 226 from 46 overs, Afghanistan came up 30 runs short on the D/L method in a loss that stand-in skipper Rashid rued for the team s inability to hold their nerves. This was Afghanistan s third loss in a row.

Who else? With 48 wickets in 20 ODIs and 20 in seven T20Is, Rashid was Afghanistan s most successful wicket-taker. In ODIs, he had the most for any teams, three more than Kuldeep Yadav with 45. In the T20I sweep of Bangladesh, legspinner starred with eight wickets. On his 20th birthday, Rashid overtook Mohammad Nabi to become Afghanistan s leading bowler in ODIs and hit a match-winning 57 not out off 32 balls as Bangladesh were beaten by 136 runs during the Asia Cup.

Honourable mention: Mujeeb, with 37 ODI wickets and nine in T20Is, was a more than capable ally to Rashid as Afghanistan kept challenging each opposition.

Though he finished 2018 as Afghanistan s leading run-getter in T20Is with 162 at 23.14, Asghar s strike-rate of 114.08 stands out in a team which has the likes of Hazratullah Zazai, Mohammad Nabi, Samiullah Shenwari and Rashid. In 12 ODI innings, Asghar managed 229 runs at 20.72 with a solitary fifty. At 31, he remains a vital part of this team and his leadership is unchallenged, but another year of sub-par personal contributions could result in changes.

Though he made his T20I debut in 2016, Hazratullah Zazai emerged as a force to be feared in 2018. In successive T20I innings in Ireland, he smacked 74 off 33 balls, with eight fours and six sixes, and 82 from 54, with six fours and seven sixes, to take his career strike-rate to 156.75. In October, Zazai smashed a 12-ball half-century in the inaugural Afghanistan Premier League, which included six sixes in an over. His ODI debut came in 2018, without anything to take note of, but the 20-year-old could surge in 2019 if given more chances.

May: T20I tri-series vs Ireland & Bangladesh (away) 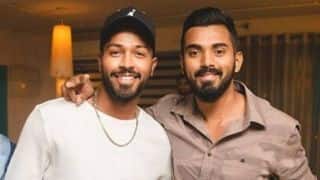