Here is an XI from the top performers in T20Is this year, who either made a very strong mark with their performances.

The year 2015 featured the biggest event in cricket right at the beginning; the ICC Cricket World Cup 2015 hogged all limelight and attention of the cricket fans. As the tournament ended with Australia lifting the trophy for a record fifth time, the interest of the fans began to fade. Later that year, Australia toured England for Ashes 2015; South Africa were in India for as many as three months; Bangladesh won everything that came their way at home; and Pakistan made giant strides. Not all of these attracted eyeballs. But, somewhere amid all this, as many as 61 T20Is were played in 2015. Yes, the count does look a lot, but if top performances are to be recalled from the slam-bang version of cricket which purportedly enjoys more popularity around the world compared to the older two, there might not be many coming from the bigger teams.

The reason is simple to understand. India had only three T20Is lined up in the entire year, in which they lost two and the third was washed out. The lowly West Indies began with two 4-wicket wins over South Africa but their story is perhaps not worth mentioning. The ICC World T20 2016 might be just few months away, but top teams in international cricket like India and Australia did not have any room in their calendars for T20 cricket: while India had 3, Australia did not play any T20I throughout the year 2015.

Sri Lanka played 4 and lost 3, but it was Pakistan who played the most. Of the 10 T20Is they played they won 6. They ended the year with a defeat to England, who shockingly had an extremely successful year as far as T20Is are concerned.

England defeated both New Zealand and Australia in their one-off T20Is, and slammed Pakistan 3-0 in the three-match series. Of the 5 they played this year, England won 4; the other ended in a tie — which too they won in the one-over eliminator. Indeed a astounding performance from a team which started the year in limited-overs format on a horrendous note.

Non-Test playing nations like Netherlands, Scotland, Oman, Ireland, UAE, Papua New Guinea (PNG), and ninth-ranked Afghanistan, on the other hand, played plenty of T20Is. There were many from these teams who shone with their performances. If there is an award for the T20I Cricketer of the Year, it must go to Mohammad Shahzad from Afghanistan, who proved to be a one-man army.

There were others as well, like Haseeb Amjad and Mark Chapman of Hong Kong, Rilee Rossouw of South Africa and Preston Mommsen of Scotland, among others. Here is an XI from the top performers in T20Is this year, who either made a very strong mark with their performances or have been selected on the basis of the talent they possess:

1. Mohammad Shahzad, wicketkeeper (Afghanistan): With 297 runs at an average of 27 and a strike rate over 156, the dashing Afghan batsman selects himself for the role of the opener. He was authoritative with the bat, and notched up scores in excess of 60 whenever he scored a half-century. He shone for Afghanistan with the bat in the ICC World T20 Qualifier, and proved to be an asset for his side. Shahzad hit 31 boundaries and 15 sixes, the most for any batsman in T20Is this year.

With 7 catches and 5 stumpings in 11 games, Shahzad also remained the most successful wicketkeeper in the year and retains his position as the glove man of this team as well.

2. Sean Williams (Zimbabwe): With 246 runs in 10 matches at over 30 and a strike rate close to 128, Williams partners Shahzad as opener. He scored two half-centuries this year, and provided Zimbabwe the stability which they do not necessarily get from their batsmen on a regular basis.

3. Faf du Plessis (South Africa): The South Africans played 6 T20Is in 2015, and du Plessis ended the year as their highest run-scorer with 272 runs in only 6 matches including a century against West Indies — 119 off only 56 balls with 11 sixes and 5 fours. His 79 not out against Bangladesh at Dhaka provided South Africa a winning start to their T20I leg of the tour, which they won. Faf averaged a staggering 54.40 in T20Is this year with a strike rate (157.22) even better than Shahzad. T20 cricket is du Plessis’ forte; he occupies the No. 3 slot.

4. Eoin Morgan, captain (England): The English captain comes in at No. 4 and is also the skipper of the T20I team of the year. Morgan provided England a massive relief by taking them to 3 wins out of the 5 they played this year, averaged 46 in 4 matches he played, and provided the stability that a team looks from its captain.

5. Matthew Cross (Scotland): Cross played 8 matches this year, making giant strides. The right-hander scored more than 200 runs in only 5 innings at 41 with a strike rate close to 178. He scored only one fifty, but hit 28 boundaries, which puts him right next to Shahzad. The 23-year-old Cross is certainly a player to watch out for.

6. Samiullah Shenwari (Afghanistan): Shenwari was the third highest run-scorer for Afghanistan this year. In 8 innings he amassed 211 runs with an average over 35. He is not known for aggressive batting, but can be a handy batsman lower down the order when the team needs stability.

7. Shahid Afridi (Pakistan): In a team loaded with players from nations who form the bottom rung, some experience is needed. Thus, Afridi comes in at No. 7, promising quick runs and four tight overs. One must remember that he is currently the leading wicket-taker in T20Is as well. The experience the Pakistani T20 captain has will always come in handy as well. Interestingly, Afridi, who is on a downward spiral in his career, scored more than 130 runs in 10 innings, but smashed 13 sixes compared to 3 boundaries this year, which means, the quick runs are always there when he is at the crease.

8. David Wiese (South Africa): The lanky Wiese is a handy batsman lower down the order, capable of hitting towering sixes. With T20s being predominantly a batsman’s arena, his batting skills late at No. 8 provides additional firepower. As a bowler Wiese did very well, claiming 14 wickets in 7 matches at an economy of around 7.

9. Ahsan Malik (Netherlands): Netherlands’ right-arm seamer ended 2015 as the highest wicket-taker with 16 wickets in 7 matches, and will thus spearhead the side. His career graph is on a rise, and he put up some good performances in the home series against Nepal as well as in the ICC World T20 Qualifier.

10. Sohail Tanvir (Pakistan): The wily Tanvir claimed 11 wickets in 8 games this year; he would provide the experience that this team needs in the bowling attack. Bowling off an awkward run-up and releasing off the wrong foot, Tanvir, with his guileful variations, can be extremely dangerous.

11. Kagiso Rabada (South Africa): Not many had noticed this young South African before he smothered the Indians in the limited-overs’ leg of their tour. He made the likes of MS Dhoni and company sweat with his sharp bowling skills; his numbers may not be that impressive for him to push for a place in the team of the year, but Rabada, with accurate, intelligent bowling, certainly is a strong candidate.

David Willey, 12th man (England): The left-arm bowler was one of the top performers for England with the ball. In 4 games, he claimed 8 wickets, was involved in victories over New Zealand, Australia and Pakistan. He showed good skills despite being expensive with the ball. 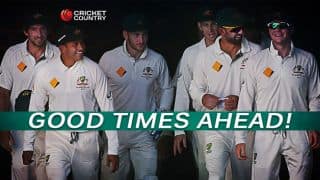