The year 2015 saw many young cricketers emerging at the world stage in cricket, showing tremendous talent and hope for the future with brilliant starts.

The year 2015 saw many young cricketers emerging at the world stage in cricket, showing tremendous talent and hope for the future with brilliant starts. Some of these cricketers played few games, while the others got ample amount of chances. While some of these young cricketers kick-started their careers with a bang, the rest failed to make a strong impression first up. Abhishek Kumar picks out 10 cricketers who made an impact this year. Note: All stats are prior to the start of the Boxing Day Test.

1.  Kagiso Rabada: Kagiso Rabada rose as one of the most promising fast bowlers in South African cricket team. Rabada, who regularly bowls at 140 kmph, has been fiery with his bouncers. He made his international debut last year against Australia in a Twenty20 match but made his special mark this year. On the tour of India in the limited-overs leg, Rabada bowled with a lot of heart and won the battles against the biggies such as MS Dhoni and a few others. He did not carry the same performances in Tests when the pitches were also lot different, but Rabada’s success would provide lot of assurance regarding the future to the South Africans. He played a key role in South Africa’s ODI series win in India for the first time this year by taking 10 wickets in five matches. Read: 2015 Yearender: Top 10 Test bowlers of the year

2. Josh Hazlewood: Though Josh Hazlewood made his international debut back in 2010, he came to prominence this year. Coming into the Australian side in the Test series against India, he started off with a five-wicket haul against India at Brisbane and quickly established himself as the third pacer in the Australian team after Mitchell Johnson and Mitchell Starc across formats. He impressed in the ICC Cricket World Cup 2015, but disappointed Australia with the ball in the Ashes. Hazlewood was sporadic, wayward at times but there were occasional sparks of brilliance as well. With the top pacemen in Ryan Harris and Johnson retiring this year, Hazlewood will now form the core of Australia’s pace attack with Starc. Read: Yearender 2015: Top 10 most thrilling ODIs

3. Mustafizur Rahman: The 19-year-old Mustafizur Rahman began with a bang against the mighty Indians, playing a massive role in their historic series win at home in 50-over cricket. He was indeed a surprise package, something that India did not notice. Reportedly hand-picked by skipper Mashrafe Mortaza, Mustafizur proved the rightness of the decision with his sharp off-cutters bowled at decent pace against the likes of MS Dhoni and others proved too much for India to handle, as he rose to limelight with some brilliant spells. Mustafizur’s performance against South Africa was impressive as well, and he truly enjoyed the first year of international cricket in his career.

4. Soumya Sarkar: If there was Mustafizur who shone to limelight in the bowling department, Bangladesh had another youngster stepping up, in the batting department. The young Soumya Sarkar looked as good as any batsman in his pomp, playing some memorable knocks in 50-over cricket. He scored a fighting half-century against the rampant New Zealand in the ICC Cricket World Cup 2015, smashed 127 versus Pakistan at Dhaka in a series that Bangladesh won, and ended the international fixtures with two superb knocks of 88 and 90 not out versus South Africa, once again playing a key role in Bangladesh’s series win.  He is yet to make a mark in Test cricket, and Sarkar and Bangladesh will hope things fall in place for the young batsman soon.

5. Adam Voges: There is an old saying, “age doesn’t matter”, and that fits perfectly with Adam Voges of Australia who made his Test debut this year at the age of 35. Voges slammed century on debut against West Indies, becoming the oldest cricket to achieve the feat in Test cricket. He had a poor Ashes despite having the knowledge of English conditions, but bounced back strongly at home when Australia decided to persist with senior cricketers. He slammed centuries against New Zealand and West Indies, and proved that there is still a lot of cricket left in him.

6. Jason Roy: The 25-year-old Jason Roy promoted himself this year from just a talented cricketer to a match-winning player. He started off his ODI career with moderately but later on, Roy gradually improved himself and has begun getting runs continuously for England. He is another South African-born cricketer for England. He has the ability to play both steady and quick fire knocks in the limited-overs format.

7. Jermaine Blackwood: Jermaine Blackwood has been one of most promising batsman for West Indies throughout the year. He is one of those rare players amid the rabble that West Indies have reduced themselves into, who has stayed at the crease when it was need the most and can be the next big for West Indies. Blackwood began the year with a resolute 113-ball 56 against the might of South Africa at Cape Town, and followed it up with a brilliant 112 not out versus England at North Sound. At Bridgetown he was again among the run-scorers as he made 85 and 47 not out, setting up a rare five-wicket win for the Caribbean team. He scored 92 at Galle against Sri Lanka, but his lone battles were not enough for the West Indies to save their face.

8. Rilee Rossouw: In Rilee Rossouw, the South African cricket team has got a very good top-order batsman and that too a stylish one. He made his debut last year in August, but made his strong impact this year. Rossouw scored two centuries against the lowly West Indies at home, and started off the ICC Cricket World Cup 2015 with scores of 61 in South Africa’s first two matches. He is among those young players, who can play a calm and aggressive knock both. Throughout the year, he has impressed with all round batting and has proved himself as a good middle-order batsman.

9. Mark Wood: With the height of 6ft, Mark Wood is another typical English fast bowler in England squad. He is very much hit-the-deck bowler, but mostly beats the batsman with his pace and gets the wicket. He has the ability to bowl consistently at 140 kph. Making his international debut this year, Wood’s consistent performances has earned him almost a regular place, especially in Tests. He was the member of the England’s Ashes-winning squad, and had the honour of taking the final wicket that sealed the series for them at Trent Bridge.

10. David Willey: David Willey is another promising player for England, both with the ball and the bat. Widely known for his bowling, Willey has shown some good potential in the recent past and has bagged decent number of wickets this year. He has the ability to score big runs at brisk pace but this is yet to be seen at the international level, though he is very effective with his bowling. 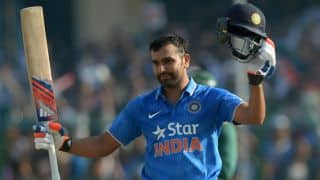 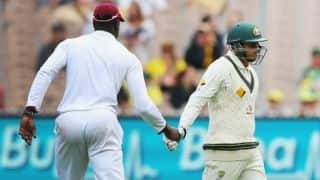 Usman Khawaja, Joe Burns score tons as Australia end at 345-3 on Day 1 of 2nd Test vs West Indies at Melbourne