The list includes two double hundreds and the fastest hundred and 150 in ODI history.

As the end of the year 2015 draws near, it is prudent to take a look at some of the most defining performances in the field of cricket. With that in mind, Rishad D’Souza casts his focus on some of the most memorable ODI knocks in course of the year. While volume of runs scored in the innings remains a big criteria, the profile of the match (reason why World Cup matches receive precedence), need of the situation, strike-rate and special significance of the innings are also weighed in.

1.) AB de Villiers‘ fastest hundred: It has been a year that AB de Villiers has perhaps (could he get even better?) realised his potential to the very fullest. He has been prolific in ODIs and perhaps the knock that best defined him was the 31-ball hundred earlier this year which set the tone for him. The knock came in the second ODI of the five-match series against West Indies. Draped in pink (for breast cancer awareness), de Villiers smashed the tame West Indian bowlers to all areas of the park and outdid the previous record for the fastest ODI century held by Corey Anderson by five deliveries. Anderson’s record which stood for just over a year had seen him reach his hundred of 36 balls against the same opposition. De Villiers was dismissed one short of the 150-milestone. He missed out on the fastest 150 record there but made amends later in the same year (more about that later). His 44-ball 149 saw him bludgeon 16 sixes and nine fours to take the wind out of the West Indies. ALSO READ: AB de Villiers’ fastest ODI century: A comparison with previous record-breaking centuries

2.) Martin Guptill‘s 237 in the World Cup quarter-final: The New Zealand opener had a fantastic year in the ODI format. In 30 innings he has amassed 1366 runs at a fantastic average of 52.53. He has been responsible for giving his team a steady start in many a match. His most destructive knock came in the ICC Cricket World Cup 2015 quarter-final, where he took a hapless West Indian bowling attack to the shredders and comfortably went past the 200-run mark. He batted through the innings to score an unbeaten 237 off just 163 balls, including 24 fours and 11 sixes, the knock of which gave New Zealand a comfortable passage way into the semi-final of the tournament. ALSO READ: Martin Guptill’s 105 and 237: Most runs from two consecutive ODI innings

3.) AB de Villiers’s fastest 150: When most batsmen miss out on a ground breaking record, they carry it as a lifelong regret for coming so close, yet so far. That is not the case for Dde Villiers. After missing out on the fastest 150 by just one run in the above-mentioned point, he managed to achieve the feat in just a couple of months. The knock in question again came against the same opposition albeit at the grandest stage. It was a ICC Cricket World Cup 2015 league match, and de Villiers launched an all out assault.  He reached the 150-run mark in just 64 deliveries, the innings of which saw him remain unbeaten on 162 of 66 balls and set up a mammoth win for his team.

4.) Chris Gayle’s double hundred against Zimbabwe: Gayle is not one to lag behind in terms of posting big scores on the board. The big Jamaican has two Test triple hundreds and multiple Twenty20 International (T20I) centuries to his name, had only an ODI double-century to conquer for himself. He fulfilled that deficit this year in his knock of 215 against Zimbabwe in the World Cup, which helped West Indies reach a score of 372, one that was well out of reach for the Zimbabweans.

5.) Mark Chapman’s debut ODI ton: Chapman is one of those emerging cricketers whose performances prove that associate nations have the spine and determination to excel. He makes the list for his knock of an unbeaten 124 against the United Arab Emirates (UAE). In doing so, he became only the 10th batsman in the history of the ODI game to score a ton on debut. His innings set up an 89-run victory for Hong Kong in the ICC World Cricket League Championship game.

6.) Jos Buttler’s tone-setting 129 against New Zealand: It was England’s first ODI match after the humiliation in the World Cup and they were up against the runners-up New Zealand. England needed something special to turn things around and Buttler stepped up. Assisted at one end by a fine hundred from Joe Root’s willow, Buttler played his natural game to smash a belligerent hundred. He finished with a 77-ball 129 helping England to their first score of over 400. A stunned New Zealand outfit managed only 198 in response. Buttler’s innings underlined England’s new attitude in ODI cricket which has paid rich dividends.

7.) Luke Ronchi’s 170 against Sri Lanka: Doubts were being raised about the worth of Luke Ronchi in the New Zealand side ahead of the World Cup. He gave the naysayers a reason to shut up with a glorious, timely 170 against Sri Lanka in the series preceding the World Cup. He came in to bat at a tricky position with New Zealand at 93 for five, but staged a phenomenal partnership with Grant Elliott from there to propel the Kiwis to 360 without loss of further wicket. His 170 came of a mere 99 balls, and was powered by nine sixes and 14 fours.

8.) Rohit Sharma’s defining 137 against Bangladesh in quarter-final: Rohit may never fulfil his promise in the Test arena, but he remains a force to reckon with in the 50-over game. His best knock in a rather productive year came against Bangladesh in the quarter-final of the World Cup. He scored a calculated and composed 126-ball 137 against a talented bowling attack to give India a score of 302. Bangladesh lost the battle by 109 runs but the story could have been different if Rohit was dismissed earlier.

9.) Tillakaratne Dilshan’s unbeaten 161 against Bangladesh in the World Cup: Age might be catching up with Dilshan but it has not impacted the force of his willow in the 50-over game. In a rather productive year, his best knock came in the World Cup against Bangladesh, in which he scored a 146-ball 161 to launch Sri Lanka to a sizeable total of 332. He played a rather sensible knock and resisted the temptation of too many aerial shots.

10.) Soumya Sarkar’s stunning 110-ball 127 against Pakistan to seal series: It has been a year of fulfilling potentials for Bangladesh, with plenty of talented youngsters coming to the fore to take their country to new heights. One such player is Soumya Sarkar who had a very productive year. His best knock was that of 127 against Pakistan in the third ODI and deciding one-dayer of the three-match series. His knock was very handy in the chase of 251 and saw Bangladesh cruise to an easy win. Perhaps it was this innings that gave Bangladesh the requisite confidence to later trump India and South Africa in home ODI series and hence bears great significance. 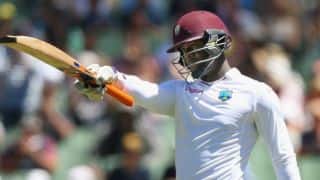