The likes of Ravichandran Ashwin, Stuart Broad, Mitchell Starc and later Ravindra Jadeja bowled their sides to victory more than once.

The year 2015 has seen some excellent cricket played across formats. The ICC Cricket World Cup 2015 gave us plenty of memorable moments, with record scores being made and thrilling matches being played. It was also a wonderful year for Test cricket, though. There were some phenomenal innings played, but by and large it was a great year for Test bowlers. The likes of Ravichandran Ashwin, Stuart Broad, James Anderson, Josh Hazlewood, Mitchell Starc, and later Ravindra Jadeja bowled their sides to victory more than once. Shiamak Unwalla takes a look at the top 10 spells in Test cricket in 2015. NOTE: These spells are not necessarily the the highest wickets taken in an innings but the impact they had on the match or simply the quality of the spell. These are arranged in order of quality of the spell. 2015 Yearender: Top 10 Test bowlers of the year

1. Mitchell Johnson vs England at Lord’s, 3 for 53: Mitchell Johnson was not at his peak in The Ashes 2015. As a direct result, England won the series 2-1. The reasoning is quite simple: the one time Johnson reignited the sparks of The Ashes 2013-14 — in the second Test at Lord’s — England folded up like ninepins and Australia romped to victory.

2. Ravichandran Ashwin vs Sri Lanka at Galle, 6 for 46: It was thrilling series that India played against Sri Lanka, with the first match being perhaps the closest contest of the lot. India bowled first and Ashwin ripped through the Sri Lankan batting, taking out Kumar Sangakkara (he dismissed him four times in four innings that series), Lahiru Thirimanne, Jehan Mubarak, Angelo Mathews, Dhammika Prasad, and Rangana Herath.

Sri Lanka were bowled out for a paltry 183, and India responded with 375. However, after reducing Sri Lanka to 5 for 3 and later 95 for 5, Dinesh Chandimal played the innings of his life en route to an unbeaten 169-ball 162. Sri Lanka set India a target of 176. What happened next will be covered in a later point on this list.

3.  Ishant Sharma vs Sri Lanka, 3rd Test at Colombo (SSC), 5 for 54: Ishant Sharma has been a much-improved bowler since the tour of New Zealand in early 2014, and he continued his good run against Sri Lanka. Having bowled considerably well without a lot of success in the first two matches of the series, Ishant finally struck gold when he ran through the Sri Lankan batting at Sinhalese Sports Club Stadium in Colombo. India were bowled out for 312 in the first innings, thanks largely to Cheteshwar Pujara who carried his bat for 145.

India needed a good start, and Ishant provided it when he had Upul Tharanga caught by KL Rahul early on. After Umesh Yadav and Stuart Binny struck again Ishant returned to get the big fish Angelo Mathews caught behind. Lahiru Thirimanne followed suit. Kusal Perera was snapped up in due course before Rangana Herath edged behind to give Ishant his fifth wicket. It was a deserving culmination of Ishant’s consistently good bowling. India went on to win by 117 runs.

4. Ravindra Jadeja vs South Africa, 1st Test at Mohali, 5 for 21: India batted first and were bundled out for 201 after Dean Elgar’s surprise 4 for 22. In response, Ashwin opened bowling and snared 5 for 51 as South Africa were cleaned out for 184. It was the start of a trend that was to continue for the rest of the series; South Africa excelling with the ball but failing miserably with the bat. India did badly in the second innings as well, getting bowled out for 200 after Simon Harmer and Imran Tahir took four wickets each.

With 218 to chase in the fourth innings, South Africa needed a positive start. Unfortunately, they ran into a ravaging Ashwin and a metronomic Jadeja, who combined to take 8 for 60. Jadeja removed Vernon Philander (sent in as opener), Hashim Amla (with a remarkably unremarkable ball that Amla spectacularly left alone and was bowled off), Dane Vilas, Harmer, and Tahir. India romped home by 108 runs.

5. India vs South Africa, 4th Test at Delhi, 143 for 10: This is not a typographical error; India put in the perfect team performance in the second innings at Delhi. After batting well for the first time in the series, India rode on Ajinkya Rahane’s 127 to amass 334 in the first innings. Jadeja spun out South Africa with 5 for 30 (Ashwin had a paltry 2 for 26) as the Proteas made a mere 121. Virat Kohli’s 88 and Rahane’s unbeaten 100 took India to 267 for 5 in the second innings, leaving South Africa a gargantuan 481-run chase. The Proteas decided against going for the chase, instead looking to block out the opposition. Temba Bavuma faced 117 balls, Faf du Plessis 97, Dane Vilas 50, Hashim Amla 244, and AB de Villiers 297.

6. Ravichandran Ashwin vs South Africa, 3rd Test at Nagpur, 7 for 66: The Nagpur pitch came under intense scrutiny from the cricket-watching world after the match, with the ICC eventually placing sanctions and calling it a “poor” pitch. Batting first, India scored 215 (more than they had managed in either innings at Mohali) with Morne Morkel and Harmer taking seven wickets between them. Ashwin, Jadeja, and Amit Mishra then combined to take all 10 wickets as South Africa succumbed for an embarrassing 79 runs. Ashwin took 5 for 32 and Jadeja 4 for 33 in the process. India ran into Imran Tahir in the second innings, and were bowled out for 173 after he took 5 for 38.

With 310 needed to win, Amla and du Plessis tried their best to rescue South Africa, taking them from 58 for 4 to 130 before being separated. Their 72-run alliance was the only noteworthy stand, as Ashwin ripped through the rest of the batting taking 7 for 66 as India won by 124 runs.

7. James Anderson vs Australia, 3rd Test at Edgbaston, 6 for 47: England won the first Test of The Ashes 2015 comprehensively before Australia thrashed them in the second encounter at Lord’s. The trend continued at Edgbaston, with Australia getting routed for 136 in their first innings. James Anderson was the star of the show, showcasing his swing-bowling prowess in all its glory. He took 6 for 47, removing David Warner, Adam Voges, Mitchell Marsh, Peter Nevill, Mitchell Johnson, and Nathan Lyon.

England responded with 281. Anderson picked up an injury and was unable to bowl more than 8.3 overs in the second innings, but luckily for the hosts Steven Finn’s 6 for 79 ripped through Australia. With 121 needed to win, home hero Ian Bell scored an unbeaten 65 as England won by 8 wickets.

8. Yasir Shah vs Sri Lanka, 1st Test at Galle, 7 for 76: Sri Lanka batted first in the opening game of the series, with Kaushal Silva scoring 125. Kumar Sangakkara scored 50 as well, but Wahab Riaz, Zulfiqar Babar, Yasir Shah, and Mohammad Hafeez bowled the hosts out for 300. Asad Shafiq’s 131 and Sarfraz Ahmed’s 96, combined with Zulfiqar’s 56 helped Pakistan to a 117-run lead.

The spotlight then shifted to Yasir, who proceeded to bowl one of the finest spells of the year. Yasir bowled first-change, and proceeded to send down 30.1 overs of quality leg-spin. Dimuth Karunaratne (79), Thirimanne (44), and Dinesh Chandimal (38) all got starts but Yasir was simply too good for the others. He ended the innings with 7 for 76, as Sri Lanka could muster just 206. Pakistan chased down the required 90 runs without losing a wicket.

9. Rangana Herath vs India, 1st Test at Galle, 7 for 48: Ashwin’s exploits in this Test have already been covered in an earlier point. India out-bowled and out-batted Sri Lanka in their respective first innings, but Chandimal ensured Sri Lanka won the first round of the second bout. India still needed a lowly 176 in their fourth innings, and Rangana Herath was no longer the same threat he used to be. On the day, though, the Herath of old walked out to take field. The portly banker sent down ball after ball of spitting venom, and hypnotised India’s batsmen one after another. He finished with 7 for 48 as India were sent packing for 112 and Sri Lanka won by 63 runs.

10. Stuart Broad vs Australia, 4th Test at Trent Bridge, 8 for 15: The spell of the year was never in question; with England 2-1 up after three Tests, both sides headed to the fourth Test of The Ashes 2015 at Trent Bridge. England — sans the injured Anderson — won an invaluable toss and put Australia in. Stuart Broad proceeded to bowl a spell of unadulterated seam brilliance, knocking over Chris Rogers and Steven Smith in the first over of the match. He picked up Shaun Marsh soon after, then got rid of Adam Voges and Michael Clarke. He returned to snap up Mitchell Starc and Johnson in the same over before finishing off with Lyon. He finished with insane figures of 8 for 15 as Australia were left reeling from the impact, gathering a shameful 60 all out.

England showed there were no demons in the pitch by scoring 391. Australia were bowled out for 253 in the second innings as well, with Ben Stokes starring with 6 for 36. England won by an innings and 78 runs, and regained the Ashes once again. 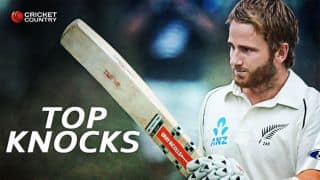