Hanif Mohammad, was the biggest and the shocking loss the cricket fraternity had to suffer this year.

The year 2016, which is about to bid adieu, gave us lot of famous cricketing moments. It witnessed the riveting ICC World Twenty20 and subsequent crowning of West Indies. It also saw Virat Kohli leading India to the number one spot in Tests overtaking Pakistan. The world cricket got quite a few young and exciting talents, who made their mark this year. At the same time, the cricket fraternity lost few of its finest gems. Rohan Arun Sawant remembers 20 such international stalwarts who left the planet for their heavenly abode this year.

Mike Marqusee was a journalist, activist and author who was known for his commentary and writings on politics, culture and sport and the points at which all three coincide.

Pakistani cricketer Israr Ali made his Test debut during his country s first-ever tour of their arch rivals India in 1952. Israr was a part of the touring party from Pakistan who travelled to India for a five-match Test series their first-ever which India won by a margin of 2-1. A left-arm fast medium bowler and a left-handed batsman, he played only four Tests for Pakistan in a seven-year career. In the four Tests, he played, Israr claimed six wickets. Against Australia in Lahore, Israr claimed 2 for 29 off 13 overs, which remained his best performance in an innings.

Martin Crowe was no ordinary cricketer for New Zealand. He made the entire nation believe that they could challenge the best when they were not in the best of the form. Crowe scored 5,444 runs from 77 Tests at 45.36. He dominated West Indies at their peak, with 544 runs from 7 Tests including 3 hundred. He averaged 45.33 against the most fearsome pace quartet. Along with Richard Hadlee, Crowe was a star turn for New Zealand cricket, playing a significant role in the country s first Test series win in England in 1986 and, as captain, taking them to the semi-finals of the World Cup in 1992. Before injuries tormented his career, the average lingered around the 47-mark.

Ruth Westbrook represented England in 11 Test matches as a batswoman and kept the wickets too. She scored 476 runs including 87 against South Africa Women which is her highest individual score. Ruth also tasted success in her job as a coach and she coached the England side that went on to win the ICC Women s World Cup in the year 1993. She married Roger Prideaux who too played for England. They were the first couple to play Test cricket.

John Warr was an extremely useful fast-medium bowler for Middlesex between 1949 and 1960. He was selected for the Australia tour in 1950 which earned him the disastrous bowling average 281.00 worst by any bowler in the history of Test cricket for nearly 35 years. His records are unlike those in First-Class cricket. Between 1949 and 1960, he played in 344 First-Class matches, taking 956 wickets at 22.79.

Jim Pothecary was a South African cricketer who played three Tests in 1960. He was a useful right-handed lower-order batsman and a right-arm medium pace bowler. Apart from this, he played for several seasons for Western Province in South African domestic cricket. In 1959-60, Jim took 25 wickets at an average of 14 apiece. He was selected for the 1960 South African tour to England. He played for South Africa until 1964-65 but was chosen for only three Tests.

Tony Cozier was the constant reporter of Caribbean cricket for more than five decades. Tony Cozier to West Indies cricket was what John Arlott was for England or Richie Benaud for Australia. He was recognised by cricket followers around the world more by his voice than his appearance. He was born in Bridgetown. Cozier played club cricket (for Wanderers and Carlton, both in Barbados) as wicketkeeper. He was more prolific in hockey, where he represented Barbados in hockey as a goalkeeper. Cozier described the cricket action precisely that is beyond many modern broadcasters. He had the capacity to keep talking over after over without allowing any interruption. When he started his career as a commentator in a Test between West Indies and Australia, BBC were so impressed with his performance that they made him a part of Test Match Special in 1966, when West Indies toured England. His BBC TMS career took off with the Headingley Test.

Deepak Shodhan, India s oldest Test cricketer, was 87 years and 210 days old when he passed away. Shodhan was a left-handed batsman and bowler who became famous for making a century (110) on Test debut against Pakistan at the Eden Gardens in December 1952. Shodhan played three Tests, scored 181 runs and averaged 60.33. In 43 First-Class matches, he scored 1,802 runs with the highest score of 261 and had 4 centuries against his name. He also took 73 wickets bowling left-arm spin.

Goddard‘s career spanned 41 Tests between 1955 and 1970. A left-handed opening batsman, he scored 2,516 runs and took 123 wickets with his medium pace. He scored his only century against England in 1965 and his economy rate of 1.64 remains the third best of all time. His best figures – 6 for 53 – came in South Africa’s first win against Australia in a home Test match, in 1966-67. He was a regular in the South Africa side till he briefly retired and moved to England in the early 1960s. When he returned, he resumed his international career and captained South Africa on their tour to Australia in 1963-64, a series which they drew. This series established South Africa as a force to be reckoned with in cricket. He also played in the 1969-70 series, won by South Africa at home.

Derbyshire stalwart Donald Carr was the first Test cricketer born in Germany and the first captain to lose a Test to India. He also ran into controversies by abducting an umpire. Carr scored 14, 76, 40, and 5, and claimed 2 wickets from his two outings. He did not get any furthermore chance to play cricket due to his poor performance.

Javed Akhtar took a total of 187 wickets in his career at an average of 18. He ended his career amidst controversies that involved being accused of match-fixing and retaliation in the form of a lawsuit. He took 187 wickets from 51 matches at a mere 18.21. He bowled flat trajectory and had the knack of taking wickets at regular intervals. He took a wicket every 48.9 balls, which is remarkably good for an off-spinner.

Hanif Mohammad was Pakistan s first cricketing star, who became an adored figure through two stonewalling Test knocks 16 hours, 30 minutes knock of 337 against West Indies to save a Test, and a year later, piling up 499 in a domestic game to beat Don Bradman s then record of 452. Moreover, he could have been the first man to score 500 in a First-Class innings, but destiny did not allow it. Hanif had sped away past 453 to break Bradman s record of 452 and was trying to go the distance. He was on 498, but the scoreboard mistakenly showed that his score was 496. There were only two balls remaining and he thought he should try to get the remaining runs as he felt a declaration coming soon. Hanif hit one through the off-side and was looking to regain strike when he was run-out. It was only later that he found out he was out on 499.

Len Maddocks, the Australian wicketkeeper-batsman, played seven Tests between 1954-56, scoring 177 runs and claiming 20 dismissals. He also played 112 First-Class matches for Victoria and Tasmania, where he scored more than 4,000 runs and affected 277 dismissals. He was also the Australian team s manager for the World Series Cricket.

Although Ken Higgs was a highly accomplished fast-medium bowler for England, many remember him for two record-breaking performances as a tail-end batsman. The first came in a win for England at the Oval against West Indies side in 1966 when he shared in an unlikely partnership of 128 for the last wicket with John Snow. They were two short of a world record when Higgs was out for 63, and the stand remains as England s highest by numbers 10 and 11 in a home Test. The second arrived 11 years later, with Ray Illingworth in what is still Leicestershire s record last-wicket partnership, scoring a career-best 98 in a stand of 228 against Northamptonshire in 1977 and helping Leicestershire to recover from 45 for 9 to 273 all out.

Max Walker was an Australian cricketer who played an important role in the emergence of successful Australian cricket team in the 1970s. Walker s performances on the 1972-73 tour of the West Indies, when he took 26 wickets to help win the series 2-0, and in the sixth Test of the 1974-75 Ashes series in Melbourne, when he claimed 8 for 143, are widely regarded as career highlights. After retiring from playing, he became a cricket commentator. He was a member of the Nine Network s commentary team between 1986 and 1991, and worked with the network until 1999, hosting the AFL Sunday Footy Show between 1993 and 1998 and presenting sports for Nine News in Melbourne. Walker was named a Member of the Order of Australia for his services to cricket and the community in 2011.

Australian leg-spinner John Gleeson played 27 Tests between 1967 and 1972 and took 93 wickets, with a career average of 36.20. His top score read 45 in Test cricket. He played 116 First-Class matches and took 430 wickets at 24.95. He was regarded as one of the cricket’s original mystery spinners.

Sid O Linn played cricket for Western Province, Transvaal, and Kent and football for South Africa and Charlton Athletic. He played 92 First-Class matches for Transvaal, Western Province and Kent, scoring 4,525 runs at 35.62. His Test call-up came in the mid-1960s for a tour of England, after a season in which he scored 619 runs at 68.78 for Transvaal. On the tour, he scored his best of 98 at Trent Bridge. The following year, he played two home Tests against New Zealand, before being dropped. Along with other things, O Linn also opened the batting for South Africa in 7 Tests; 5 of them came in South Africa s England tour of 1960, and once did a hole-in-one in Brisbane. 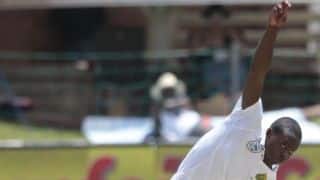