Younis Khan: Timeline of statistical achievements during the 2-Test series against Australia

Younis Khan: Timeline of statistical achievements during the 2-Test series against Australia

Statistical achievements which reassured that Younis Khan remains one of the greatest Pakistan batsman ever.

Before the start of the two-Test series against Australia, Younis Khan was at 7,610 runs in 91 Tests at an average of 51.41. He was already at loggerheads with the board for his ouster from the 50-over format. Abhijit Banare looks at some statistical achievements which reassured that Younis remains one of the greatest Pakistan batsman ever.

25 – Younis Khan equaled Inzamam-ul-Haq’s record of most centurions in Test matches by a Pakistan batsman. But he soon surpassed that with a century in the next innings and became the leading Test centurion. He followed it up with one more in the second Test to make it 27.

9 – Younis  became the ninth batsman to score a century in each innings of a Test match against Australia.

2 – Younis became the second batsman after Herbert Sutcliffe to score centuries in three consecutive innings against Australia. Sutcliffe had created the record.

10 – Younis in the second Test achieved his 10th 150plus score. He joined Javed Miandad as batsmen with most 150+ scores for Pakistan. However, in the overall list he is too far down with Sachin Tendulkar on top with 20.

1,835 – Younis holds the record of most runs scored at a neutral venue in tests. Younis averages 55.60 and has eight centuries, six fifties to his name.

When the 'cloud crapped' after Graham Gooch's triple ton 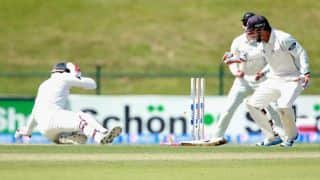