Mallya has loads experience in dealing with non-performing assets and reneging on payments.

Flamboyant liquor baron, Vijay Mallya, has transferred Yuvrjaj Singh from Royal Challengers Bangalore (RCB) to Kingfisher Airlines. Not long back, Yuvraj Singh had emerged as the star pick in Indian Premier League (IPL) auctions with Mallya’s RCB picking him up for a whopping Rs 14 crores. However, after Yuvraj’s nightmarish outing in the World T20 final on Sunday, Mallya is having second thoughts about the contract.

Fortunately, Mallya has loads experience in dealing with non-performing assets and reneging on payments. Accordingly, he has transferred Yuvraj from RCB to Kingfisher Airlines. A United Brewery Group spokesperson said that since both KFA and RCB belong to the same stable, it does not matter who signs the contract and that UB group is fully committed to the offer made to Yuvi. Mallya is supposed to have taken an approval from RCB captain Virat Kohli through SMS regarding the transfer. This was the very message that Kohli was checking after getting the man of the tournament award.

So this means although Yuvraj will play for RCB, he will have to wait for KFA to issue a paycheque — which could well mean the wait could be forever. Yuvraj has already been told by KFA staff, creditors, vendors and investors to stand behind them in the queue.

The development has left Yuvraj even more devastated. “It sucks to treat me like a KFA employee because of one bad innings. Jab balla chal raha hai, thaat hai, beta. Jab balla nahi chalega to….,” Yuvi trailed off.

(Ramesh Soundararajan is a Bangalore-based corporate executive, who is passionate about all things passive: Watching sports, reading books and attending meetings. The above satire was originally published in www.theunrealtimes.com — India’s favourite satire, spoof, parody and humour portal) 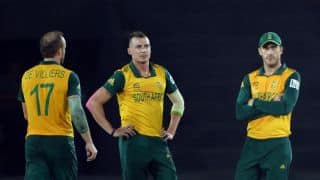