The Yuvraj Singh-led India Blue maintained their winning record to clinch the NKP Salve Challenger Trophy 2013 with a 50-run victory over Virat Kohli’s Delhi. It was a series that saw players from two ends of the spectrum participate and look to gain from their performances. While some seniors were looking for a way back, the younger lot was out there to prove a point. Prakash Govindasreenivasan and Abhijit Banare look back at the tournament and the performers. 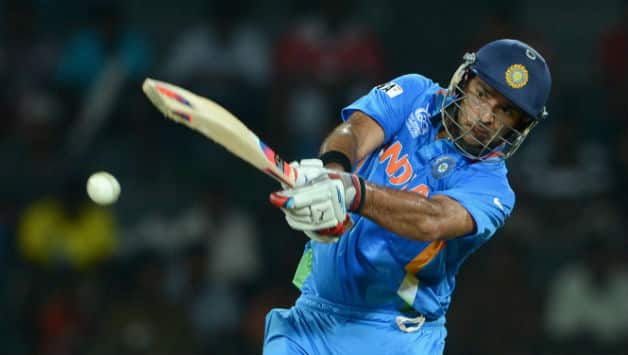 The Yuvraj Singh-led India Blue maintained their winning record to clinch the NKP Salve Challenger Trophy 2013 with a 50-run victory over Virat Kohli’s Delhi. It was a series that saw players from two ends of the spectrum participate and look to gain from their performances. While some seniors were looking for a way back, the younger lot was out there to prove a point. Prakash Govindasreenivasan and Abhijit Banare look back at the tournament and the performers.

The NKP Salve Challenger Trophy often gave young and upcoming cricketers a chance to rub shoulders with the best in the country. While over the years, the tournament has lost its sheen due to the unavailability of star attractions as well as clash in scheduling, this year’s tournament had some big-name players looking to gain from it.

The seniors were always going to be the most talked about players in the series. The entire spotlight of the tournament was on the triumvirate of Virender Sehwag, Gautam Gambhir and Yuvraj Singh. While Yuvraj was coming in at the back of good performances for India A, the Delhi duo of Gambhir and Sehwag had much more at stake.

Yuvraj, the skipper of India Blue, extended his good run of form with the bat. He walked into the side in the second game against Delhi where India Blue amassed a total of 345. The Southpaw had a slow start but a poor wide delivery from Gurkeerat Singh helped him ease the pressure with a shot through the covers. That set in motion, a flurry of shots all around the park. All of a sudden, Yuvraj was starting to look as devastating as ever. The clean hitting and the elegant after-shot pose also made a seamless return to his game. The reflexes, which were under heavy scrutiny ever since he returned after his battles with cancer, seemed to have made a comeback.  In the final against Delhi, Yuvraj started on the same footing but failed to consolidate. However, his score of 84 in the first game could go on to put pressure on the selection committee as Yuvraj seeks a return to the national side.

Sehwag started the tournament in typical slam-bang fashion with a quick-fire half-century against India Blue. Sehwag’s ability to enthral the crowd at Indore is well documented in his mind-boggling knock of 219 against the West Indies in 2011. He was back to showcasing his ability to hit the ball to all over the park with a 38-ball knock of 59. What’s surprising is the fact that he played this knock from the No 4 position. With this effort, Sehwag has made his intentions of getting back into the national side — and begin his second homecoming in the middle-order — crystal clear. But for the 34-year-old, it will require more than just one big innings to make a strong case for his return. Gambhir on the other hand, played two out of the three matches for Delhi but failed to make a sizeable contribution. His scores of 20 and four have left him with much to work to do before making a possible comeback.

The heir apparent and their nascent steps

A host of youngsters used the platform to present their case to the keenly watching selection panel. The little bit of Akshath Reddy was seen on celluloid while representing the erstwhile Indian Premier League (IPL) franchise, the Deccan Chargers. The platform was good but the youngster could not make the kind of impact that the tournament demanded. The NKP Salve Challenger Trophy however, proved to be a different ball game. Playing for India Blue, he started off with a consummate half-century against Delhi. The slight-framed Reddy followed up this knock with a better one against India Red, scoring 84 from 96 deliveries. Coming from Hyderabad, the 22-year-old carries on the legacy of being a wristy batsman and shows great promise for the future. His habit of getting out to rash shots is one chink in his armour that needs to be rectified and the youngster is fully capable of mending his ways and fighting for a national spot a few years down the line.

Milind Kumar, another 22-year-old youngster playing for Delhi, showed great levels of maturity in the tournament. Coming in with just six First-Class and 15 List A games to his name, Milind scored an important half-century in the final to prove that there was probably no correlation between age and temperament. Milind walked in to bat when Sehwag was dismissed cheaply to leave Delhi in a spot of bother. His knock of 54 from 67 deliveries helped Delhi stay in the game till the very end before falling short by 50 runs. Milind’s good technique and ability to revel under pressure makes him an exciting prospect for the future.

The soft-spoken 24-year-old right-arm off-spinner Shahbaz Nadeem too had a decent run in the tournament. He picked up just two wickets but his ability to keep the run flow under control deserves praise. While plying his trade in the IPL for the Delhi Daredevils, he had just four overs to prove his worth and make an impact against batsmen who would seldom rate spinners highly, given the format of the game. In the Challenger series however, Nadeem’s economy rate of 4.57, the best in the series, has its own story to tell. The off-spinner has put in a disciplined performance, ensuring the selectors of options in the spin department for the future.

Not every day do you come across cricketers with a domestic batting average of 48.90 and close to 100 wickets to their names in First-Class cricket who are struggling to find their footing at the highest level. Meet Rajat Bhatia, the unfortunate perennial performer who has endured season after season for Delhi in a hope to represent the country some day. At 33, not much hope would be left but Bhatia continues to toil. His ability to play the role of an aggressor down the order and bowl medium-pace with exceptional variation made him a vital cog for Delhi in the tournament. His four-wicket haul in the final against India Blue was an exceptional display of bowling. With the best trick up his sleeve — his slower delivery — Bhatia accounted for two of his four wickets.

The likes of R Vinay Kumar and Bhuvneshwar Kumar, who have already played at the highest level of the game, used this platform to consolidate their position. Bhuvneshwar’s uncanny knack of picking up a wicket early on in the innings brings back memories of Irfan Pathan in his first year at the international level. Bhuvneshwar was a touch expensive throughout the tournament but saved his best for the finale. With figures of four for 39 from nine overs, Bhuvneshwar deflated Delhi’s batting and ensured that they would never catch up with India Blue’s total.

Vinay Kumar, who has been in and out of the Indian side in the recent past, took the opportunity to finish the tournament as the joint highest wicket-taker, alongside Bhuvneshwar, with eight wickets from three games.

The most entertaining aspect of the NKP Salve Challenger Trophy 2013 was Ashish Nehra and his new found love for batting. Despite having made a career for being an out-and-out left-handed fast bowler, Nehra donned the hat of an unlikely aggressor with the bat. In the opening encounter between India Blue and Delhi, Nehra came down the order and surprised one and all with his powerful hitting. With one four and two sixes in his knock of 37 from 41 deliveries, Nehra threatened to take the game away from the opposition. He failed to do that, but won a handful of hearts purely for the entertainment he provided. He returned to showcase more swagger and prove that his initial knock wasn’t just a flash in the pan kind of an innings. In the final between the same two sides, Nehra walked in and slammed a six off the first ball he faced. He went on to hit two more to finish with 24 off 13 deliveries.

The selection panel under Sandeep Patil has done a commendable job. From picking players based on form rather than reputation to sending a full strength ‘A’ side to South Africa ahead of a possible tour, they have hardly put a foot wrong. In that respect, it won’t be entirely surprising if Patil was out there in one of the venues, silently scouting and earmarking some of these youngsters for the future as well as deciding the way forward for the seniors.

Whether or not some of these players make it to the national side, a good outing in the NKP Salve Challenger series gives them immense confidence ahead of the upcoming Ranji season which will in turn, result in high quality cricket, something that is said to be lacking severely. If the quality of cricket does manage to improve, more players will come under the radar in contention for national selection. From a bird’s eye view, Indian cricket seems to be heading in the right direction.