Despite being a team game, cricket has always witnessed one or two players getting all the praises. India‘s ICC Cricket World Cup 2011 triumph was one of those scenarios, where all the praises were showered upon MS Dhoni and Sachin Tendulkar, but the contribution from the likes of Gautam Gambhir, Yuvraj Singh, Zaheer Khan went under the radar. There are definitely two categories of players in a team sport. One are the star players, on whom all the attention is diverted upon. And the others are the unsung heroes, who do perform their role brilliantly without coming into much of a limelight. And in Sunrisers Hyderabad‘s (SRH) victorious, Yuvraj Singh played that role. FULL CRICKET SCORECARD: Royal Challengers Bangalore  vs  Sunrisers Hyderabad , Final match, IPL 2016

Yuvraj did not score any half-century in this tournament. Despite that, the matches in which he performed, SRH won all of them. This just goes on to show his ability to win his side a game. Coming at No. 4, he did all that was asked from him. The way he paced his innings and took attack thereafter showed his intelligence. Above that, his fielding was also particularly good, with the highlight of him running out Colin Munro in the Eliminator, which changed the game completely.

His stats of 236 runs from 10 matches may sound very ordinary, but his impact was far from it. In a team that relied on its bowling brilliance, SRH’s batting in the first seven matches was ordinary. Barring the miraculous David Warner and Shikhar Dhawan to some extent, no other batsman showed much of a promise. For a team that was aiming to win their first IPL title, they undoubtedly needed someone to compliment Warner, both in terms of runs and strike-rate. And up came Yuvraj to the task. ALSO READ: Yuvraj dedicates SRH’s IPL victory to Nehra

In his first game, he struggled to get going, scoring 5 from 14 balls. It seemed what the critics were saying about him was coming true. But since then, his stellar performances led his side to many victories. The fixture against Mumbai Indians (MI) saw Yuvraj return to his old self, scoring a 23-ball 39 which helped SRH post 177 on the board. While it wasn’t a fifty or a hundred, his knock meant SRH got 20 more runs than what they would have expected.

Since that knock, he gained more and more confidence. His 23-run knock against Rising Pune Supergiants (RPS) was a controlled and patient innings, at a time SRH when needed someone to stay at the crease. He could not build on a solid start, but his knock in the end proved to be the difference. ALSO READ: IPL 2016: Yuvraj Singh imitates good friend Chris Gayle

After that, his best performance came in a match against Kings XI Punjab (KXIP). Chasing 180, the SRH’s top three laid the platform but got out at crucial time. However, out came Yuvraj and blasted the opponents apart. A 24-ball 42 was a timely reminder to the whole world that he still had the power in his arsenal.

And even in the playoffs stage, Yuvraj’s performance were really impressive. Against Kolkata Knight Riders (KKR) in the Eliminator, he played a very crucial 44-run knock, which propelled SRH to 166. And, in the final against Royal Challengers Bangalore (RCB), he set the tone with a 23-ball 38 that helped his side post a mammoth 208.

Despite all this, he never came in much limelight. For SRH, all the praises were directed towards skipper Warner and the bowling duo of Bhuvaneshwar Kumar and Mustafizur Rahman. Still, Yuvraj kept on doing what Yuvraj does the best: play for the team.

To sum it up, all those—who believe Yuvraj lost his old self—should have a good look at the boundary he scored against Yuzvendra Chahal in the final. The drive through covers was so immaculate that even VVS Laxman would have been left awestruck. Playing in a batting unit, where the middle order was the weakest link, Yuvraj held his nerve to give the team much needed stability. And, despite not getting limelight, he performed incredibly well to shield the role he has held all his career: the unsung hero. 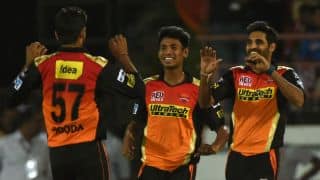