Zafar Ansari, Haseeb Hameed, Ben Duckett and Gareth Batty: A look at the four ‘new’ faces from England ahead of Bangladesh Tests

England have stacked their side with 17-men and some surprises. Let us have a look at them:

England put a lot of emphasis on Test cricket and prepare well in advance for important tours. After a lot of speculations their tour of Bangladesh finally got underway. Bangladesh, though a better team in limited-overs, are yet to prove themselves as a threat in Test cricket. But as England prepare for the big series against India starting next month, this tour becomes a preparatory one. Beating India in their backyard is something the best of line-ups have failed to do and England are the only side in recent times who have managed to do so, in the 2012-13 series, courtesy Alastair Cook s consistency with bat, an astonishing innings from Kevin Pietersen and some splendid bowling from their spin duo of Graeme Swann and Monty Panesar. FULL CRICKET SCORECARD: Bangladesh vs England, 1st Test at Chittagong

The five-match marathon Test series against India will test them to the core. The opening spin bowling department will be the key if they want to replicate what they did four years prior. These areas did contribute in their defeat in UAE last year, against Pakistan. The conditions in India would not be vastly different. At the moment I am going a bit too far as they have the Bangladesh hurdle to cross first.

By no means will England take Bangladesh lightly especially after the heated exchanges that marred the ODI series. Bangladesh will be playing in their backyard, which will further intensify the contest. England have stacked their side with 17-men and some surprises. Let us have a look at them:

Zafar Ansari: Still 17, playing for Cambridge, young Ansari caught the eyes of everyone when he dismissed Kevin Pietersen in 2011. The 24-year-old Surrey all-rounder is a bundle of talent. A student from Cambridge, brilliant at music, cricket is not the end of the life for this bright kid. But he is close to living a dream that only a privileged few can.

The son of a Pakistani father and an English mother, Ansari was certain to make his Test debut against his father’s country of origin before a thumb fracture that needed multiple surgeries ruled him out for seven months.

A left-arm orthodox bowler, something Bangladesh produce aplenty, he adds to England’s spin brigade that already has Moeen Ali, Adil Rashid and Gareth Batty. England already have a bunch of quality all-rounders and it will be his bowling that will be needed more. Ansari is a steady middle-order batsman, who has enough patience at his disposal. England wear a settled look, so it will be interesting to see if he can make the starting XI at Chittagong. He has made a strong case for himself with a four-wicket haul in the practice game.

Haseeb Hameed: Still in his teens, this Lancashire lad is touted to be a big thing in English cricket. Right since the retirement of Andrew Strauss in 2012, England have not been able to find a long-term opening partner for Cook. From Nick Compton to Michael Carberry to Sam Robson to Alex Hales, England have tried a lot of options as their second opener (including Jonathan Trott) without success. Hameed promises to fit into that shoe. READ: Haseeb Hameed: 12 lesser-known facts about the player

The 19-year-old Bolton-born has his origins from Gujarat, and is hailed for his sound technique that has earned him the nickname ‘Bolton Blocker’. Hameed has played only 20 First-Class games and his strike-rate is just over 38. In fact, his reputation as a stonewaller is probably the cause for him not playing a single List A or Twenty20 match.

Cook not being overtly aggressive and Hameed scoring at snail s pace might hamper England’s scoring initially. However a left-right combination at top looks pretty apt.

With a solid fifty against BCB XI, Hameed has sent a strong message and is all set for Test debut this Thursday. The interesting bit is he is yet to play a List A and First-Class game.

Ben Duckett: The Northamptonshire opener has scored plenty of runs in all formats of domestic cricket and at a brisk rate, too. Just 22, Duckett is likely to be presented with his Test cap at Chittagong and is expected to bat at No.4, as the perception is he is more adventurous and versatile than Hameed. If this happens, it is unlikely that Jos Buttler will play as a specialist batsman, a theory that has been doing rounds in England cricket.

“It’s a bit of a shootout but they could end up both playing. There’s no reason why Duckett couldn’t bat in the middle order, there are places going. In terms of balance, here you might want three spinners in the team, Dhaka only two. We have half an eye on the India series as well,” said England assistant coach Paul Farbrace.

He fifties in the warm-up games have been delightful to watch. Duckett was handed an international debut in the ODI series against Bangladesh. He scored two crucial fifties in England’s wins at Dhaka and Chittagong.

Duckett is an attacking batsman who possesses a strike-rate touching 71 in First-Class and over 101 in List A. Earlier this year, for England Lions, he smashed an unbeaten 220 from 131 balls against Sri Lanka A. He has been in sublime touch, scoring 185 and 80 against Glamorgan a couple of weeks back and following that up with 208 against Kent. In April this year, the southpaw smashed an unbeaten 282 not out off just 367 balls.

He will be one to watch out for.

Gareth Batty: The 39-year-old off-spinner is a misfit in the list but once again proves the clich ‘age is just a number’ true. In fact, Batty made his First-Class debut for Yorkshire on April 16, 1997; Habeeb was three months old at that time.

Having made his Test debut in 2003, he last played for England in 2005 before the historic Ashes series. Batty’s consistent performance and experience has earned him the recall which, going by his words, is “surreal”. READ: ‘Comeback Man’ Gareth Batty to set new world record in Tests

With Moeen and Ansari around, it is unlikely Batty will get to play the first Test. However, England have strengthened their spin battery, which will be their key to success in the long subcontinent tour. Batty will have a role to play in the coming days and his experience will be invaluable to this young bunch. 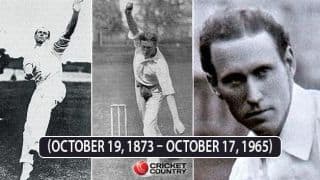 Bart King: 16 facts about the greatest cricketer from USA