Zaheer, Ishant, Umesh Yadav, Ashwin and Ojha that will decide India’s fate in the series.

In the final session of the thrilling Hobart Test, when the impressive Doug Bracewell had the Australians in all sorts of trouble on a superb pitch for Test cricket, Tony Greig, who was on air couldn’t resist taking a dig at the Indian team that had just landed Down Under. “I’d love to see the Indians bat on this pitch.” he said. Mark Taylor (or might have been Ian Smith, one of the two anyway) replied, “They probably wouldn’t get off the bus.”

No one who witnessed India’s travails during the England tour could argue with these less than charitable remarks, but I would still stick my neck out and say that India could not have batted any worse than Australia did at Hobart! In fact, in the upcoming Australian series, it is exactly these pitches that represent India’s best chance of winning, not batting beauties.

It is an age-old saying that batsmen save Test matches or, at best, set up a win, but it is the bowlers who actually win them. Clichés are clichés for a reason, and more than Sachin Tendulkar and company, it is the performance of Zaheer Khan, Ishant Sharma, Umesh Yadav, Ravichandran Ashwin and Pragyan Ojha that will decide India’s fate in the series. On benign pitches, let’s face it, India’s attack is nothing more than pop-gun, and no mountain of runs that the batsmen pile up will be enough to win a game. However, a spicy pitch will give them a chance to pick up 20 wickets, and therein lies the open secret of winning Test matches.

The England debacle notwithstanding, most of India’s successes abroad in the last decade have come in bowler-friendly conditions. Headingly 2002, Wanderers 2006, Jamaica 2006, Trent Bridge 2007, Perth 2009, Durban 2010 are all Test matches India had no business winning. But win they did, because the pitches at each of these venues gave the weaker suit of the Indian team, the bowling, something to play with. The batsmen didn’t set many of these Tests on fire, but on each occasion, someone out of the Sachin Tendulkar-Rahul Dravid-VVS Laxman triumvirate stood up and scored just enough runs.

And this time the Australian batsmen might be just as alarmed as the Indians, if not more, at the sight of grass on the pitch. They might just agree with what Indians have been saying for years, that grass is for cows to graze and has no place on a cricket pitch. In the last two years, they have collapsed for less than 150 on five occasions, less than 100 on three. Four of those capitulations came against the skillful attacks of Pakistan, England and South Africa, but last week a bunch of honest Kiwi toilers – who were nothing more than persistent in their lines and swung the ball just enough to evade the middle of the bat and take the edges instead – first shot them out for 136, and then did not allow them to chase down 240. No disrespect to Chris Martin, Bracewell, Tim Southee and Trent Boult (I have a hunch the last mentioned will probably turn out better than Bracewell, but that’s a story for another day), but neither of them are anywhere close to the class of Dale Steyn, Mohammad Asif or even James Anderson. There is no reason why Zaheer, Ishant and Yadav cannot rattle the Australians on a helpful track. Australia better ask their groundsmen for greentops at their own peril.

There was a time when every Indian team was welcomed with green carpets whenever they played anywhere outside the subcontinent. This time, the Indians might just be looking forward to such a welcome. Tony Greig isn’t the only one, I would like to see the Indians play on a pitch like the one at Hobart too. But I’d like it even more to see Australia bat on such a pitch again! 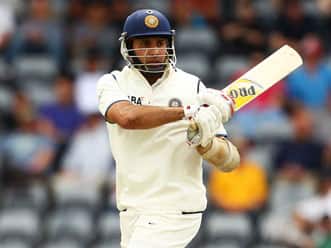 Sachin Tendulkar apart, its VVS Laxman who will be most feared by Australia