Shoaib Malik played one of the finest knocks under pressure but was denied a winning chance by bad light.

Pakistan were engaged with home team Zimbabwe in an engrossing encounter at Harare Sports Club (HSC) in the second One-Day International (ODI). The match, which saw plenty of twists and turns, was ultimately determined by the Duckworth-Lewis (D/L) method which saw Zimbabwe win the game by five runs. Pakistan were unhappy with the call as they had a realistic chance of victory, needing 21 runs off two overs at the time of the decision. Nevertheless, the match will be remembered for incredible performances on both sides. Rishad D Souza recounts critical moments in the match. FULL SCORECARD: Zimbabwe vs Pakistan 2015, 2nd ODI at Harare

Chamu Chibhabha s gritty knock: Zimbabwe s innings was given a solid base by a determined Chamu Chibhabha, who opened batting and played through till after the 40th over. His innings never attained a big boost in terms of momentum or flow, but he fought hard and kept the singles coming. He amassed 90 runs before being denied a hundred by Wahab Riaz, but had the platform set for Zimbabwe. His knock included big partnerships with Brian Chari and Elton Chigumbura. ALSO READ: Zimbabwe clinch tense clash under controversial circumstances against Pakistan in 2nd ODI at Harare to win by 5 runs (D/L method)

Wahab Riaz’s expensive but effective spell: Pakistan s bowling spearhead Wahab Riaz had a mixed day in the office. In the ten overs he conceded an uneconomical 63 runs, but he counter-balanced it with crucial wickets which helped slow Zimbabwe down in phases. He got rid of opener Hamilton Masakadza cheaply, denied Chibhabha a hundred by dismissing him for 90, prevented an ominous-looking Sean Williams from going big by getting him caught at first slip for an 8-ball 10, and finally brought an end to skipper Elton Chigumbura s destructive knock in the penultimate over.

Elton Chigumbura s finishing effort: After Chibhabha s anchoring effort, Chigumbura realised that it was prudent to put more runs on the board at a quick rate. He led the charge in the final overs and was suitably supported in the cause by Sikandar Raza, and to some extent by wicketkeeper Richmond Mutumbami. Chigumbura smashed 67 in 55 balls, while Raza hit a 21-ball 32. Mutumbami batted only four deliveries unbeaten, but added 14 valuable runs to propel the score to 276.

Tinashe Panyangara and Luke Jongwe wreck top-order havoc: Panyangara may not be the best bowler to have in the team for the middle and latter stages of an innings, but with the new ball he has frequently put Zimbabwe in strong positions. His gently-paced tempters outside off produced mild seam movement on the Harare track that makes the ball do funny things after pitching. Added with the scoreboard pressure Pakistan were under, Panyangara wrecked havoc. He got rid of skipper Azhar Ali and fellow opener Bilal Asif for 1 and 0 respectively. Luke Jongwe similarly dismissed Asad Shafiq for one run. Pakistan were 8 for 3 after the carnage.

Shoaib Malik s defiance: Despite, the dire straits Pakistan found themselves in at 76 for 6 Malik was full of self-belief in the way his knock played out. All he wanted was a partner to support him at one end, which he found in Aamer Yamin. Malik and Yamin started well and while the asking rate kept rising, they kept hopes alive for one of those freak turnarounds.

Dropped catches cost Zimbabwe: Malik was dropped on 37 off a dolly he offered at point off Chibhabha s bowling. From there his innings was quite faultless. Yamin was also dropped by Raza at the long leg at the boundary. To make things worse the ball went for six. Following that, the duo punished Zimbabwe. The acceleration was evident and the win suddenly started looking more and more likely. Both batsmen got to fifties with sixes.

Malik carries on with Yasir Shah: Zimbabwe heaved a momentary sigh of relief when Yamin was finally out by giving an edge to the keeper off skipper Chigumbura s bowling. The relief lasted only a few minutes though; Wahab Riaz the next man in was also dismissed by Chigumbura cheaply in a fine run out attempt, but No. 10 Yasir was spectacular. He not only rotated strike with the determined Malik but also hit a few boundaries himself. Zimbabwe were under pressure again.

Rain and light play havoc: At the end of the 42nd over after Riaz s dismissal rain came pouring down and players walked off, but umpires were keen on getting play underway. When the rain lightened a bit, the players were asked to continue. Zimbabwe were not impressed with the decision. The wet ball due to the rain coupled with the pressure of squandering a match caused Zimbabwe s bowlers to evidently lose control. The ball slipped out of the hand way too often and Pakistan s batsmen capitalised. The Zimbabwean players grumbled and the light factor started becoming an issue too, but umpires asked that play be continued.

Controversial finish: The umpires seemed hell bent on not have to resort to the Duckworth-Lewis (D/L) method to determine the outcome of the game, but at the end of the 48th over, with Pakistan requiring a mere 21 runs to win in two overs, play was suspended owing to dim light. In little time, the cut-off period was reached and it was deemed that Zimbabwe won by five runs on the D/L method as play could not continue. All the efforts of Malik, stranded unconquered on 96, and tail-ender Yasir on an unbeaten 22-ball 32 went in vain. The Pakistan players were expectedly unimpressed with the decision more because of the timing of it. But, it could be said that the deserving side won. 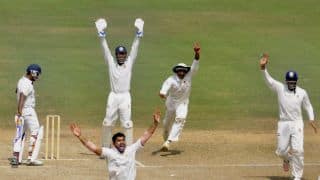 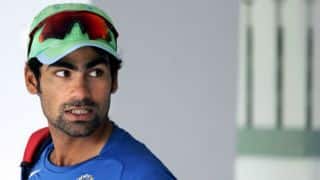