The day Ridley Jacobs and Fidel Edwards pulled off an amazing heist!

On November 8, 2003, the last-wicket pair of Ridley Jacobs and Fidel Edwards defied left-arm spinner Ray Price for 32 minutes and 71 deliveries on a turning final-day track at Harare. Abhishek Mukherjee looks back at a Test — one of the closest finishes in the current millennium between two relatively weak sides.

It seemed to be an ordinary Test headed for a draw. Zimbabwe won the toss and elected to bat, but the West Indies fast bowlers soon reduced them to 58 for 3. The Zimbabweans then fought back, adding 54 for the fourth, 42 for the fifth, 79 for the sixth, 81 for the seventh and a colossal 168 for the eighth wicket. Tatenda Taibu scored 83 and Andy Blignaut 91, but the show-stopper was skipper Heath Streak with an unbeaten 127.

Zimbabwe amassed 507, making hay in the absence of Jerome Taylor, who had broken down with a side injury in his 19th over. Fidel Edwards took 5 for 133 in an innings where West Indies used nine bowlers.

On the third day, as the pitch was getting rolled out before the match, Trevor Gripper hit a ball under the roller; this resulted in a deep crater just short of a left-hander’s off-stump. Play began late, and Brian Lara showed an excellent gesture in deciding to bat on despite the fact that his side would have to face the most adverse of situations. Even then, Wavell Hinds and Darren Ganga batted well, and at 211 for 3, things looked under control.

Then Ray Price struck. He bowled with excellent accuracy, was relentless in his line and length, and with some help from Streak and Blessing Mahwire, dented the West Indian middle-order. They managed to save the follow-on, but Price’s spell of 37.2-13-73-6 restricted them to 335.

The absence of Taylor hugely increased the workload on the other three seamers — Corey Collymore, Vasbert Drakes and Edwards. Zimbabwe ended the rain-affected fourth day at 94 for 4, 266 runs ahead. The final day, November 8, was supposed to be an extended one, and an early declaration would have led to a possible Zimbabwean victory.

As things turned out, Streak batted almost through the entire first session; Zimbabwe declared at 200 for 7, leaving West Indies 373 to chase in 83 overs. One could not blame Streak for his defensiveness, as Zimbabwe had come into the match after 11 consecutive Test defeats. West Indies went to lunch with the score on 18 without loss.

Things transformed dramatically after lunch. Streak removed Wavell Hinds, while at the other end Price had Chris Gayle caught behind. Two wickets had fallen in the space of four balls, and 37 without loss suddenly had become 37 for 2 as Brian Lara walked out. In the very next over, Streak trapped Lara leg before — though replays showed that Billy Bowden had committed an error; the ball would have missed the stumps. And at 38 for 3, Zimbabwe sensed a chance.

Blignaut, meanwhile, bowled an inspired spell and trapped Ramnaresh Sarwan leg-before, only for the umpire to call a no-ball. Ganga hung on grimly, but his patience soon ran out as he stepped out to hit Price, yorked himself and lost his stumps. The score now was 73 for 4. Encouraged by the copious turn and bounce Price had found, Streak preferred Gripper’s off-breaks to Mahwire’s seamers. Gripper struck with his third over: Sarwan lost patience, stepped out and was stumped. West Indies were now 103 for 5.

Shivnarine Chanderpaul, as he has done on many occasions before and after the Test, set up fort at the crease with Ridley Jacobs. They saw off Price and the others till tea, and West Indies were at 126 for 5 when the players left the ground with 37 overs still to be bowled in the day.

After tea the duo seemed at ease, till Chanderpaul uncharacteristically hit Price to mid-wicket, where the debutant Vusimuzi Sibanda took an easy catch. The score read 171 for 6.

It was then that Blignaut rose to the occasion, having Drakes caught off a lifter and then getting the injured Taylor to edge one. Stuart Matsikenyeri, standing in fifth slip — a rare position for a Zimbabwean fielder in an international match — took the catch on rebound. And when Mark Vermeulen caught Collymore at silly-mid off (204 for 9) to give Price his tenth wicket of the match, Jacobs, on 58 off 102 balls, and Edwards had to bat out 71 balls in fading light.

Streak, Blignaut and Price were all bowling well, but Price looked reasonably tired. However, with the light fading, Streak had no option but to remove both Blignaut and himself from the attack. An exhausted Price had to continue bowling in fading light, supported only by Gripper’s mild off-breaks at the other end. The ball turned and bounced, but both Jacobs and Edwards hung on. Jacobs placed faith on Edwards, and the last batsman in the line-up showed surprising resilience.

Streak increased the number fielders around the bat; slips and bat-pad catchers lurked like hawks as the crowd cheered on, sensing a Test victory after a long, humiliating string of defeats. But Jacobs and Edwards were immovable, eventually salvaging the match for West Indies. The pair played out the required 71 balls, and Edwards managed to survive 27 of them; West Indies finished with 207 for 9. 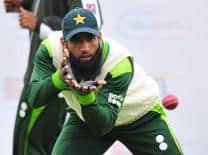