10 controversial statements from modern-day cricket that rocked the cricket fraternity.

“I don’t see how you can play anything of value if you don’t offend someone,” to tweak the words of Marvin Harris, the American anthropologist and writer.

Controversies are a part of modern sport, and cricket contributes a huge chunk to it regularly. The world of cricket has been left bamboozled time and again with statements by renowned players accusing, threatening, and scoffing at teams and individuals.

Here are 10 controversial statements from modern-day cricket that rocked the cricket fraternity:

Shahid Afridi’s comments to Samaa news channel after returning home from the 2011 World Cup in India.

Kumar Sangakkara made those critical comments in his the 2011 MCC Cowdrey Lecture in on how political interference and corruption was affecting Sri Lankan cricket.

Michael Vaughan’s tweet during India’s 2011 tour of England alleging that VVS Laxman applied Vaseline to his bat so that the Hot Spot technology would not detect the edge.

Greg Chappell’s above words in his book Fierce Focus were about Sourav Ganguly, who was instrumental in the Australian’s appointment as the coach of the Indian cricket team. Chappell’s book was released in November 2011.

Shoaib Akhtar questioned India’s stalwarts Sachin Tendulkar and Rahul Dravid’s ability to finish the game in his autobiography, Controversially Yours, released in late 2011.

Shahid Afridi’s sarcastic and dismissive answer earlier in 2014 when asked about a women’s cricket team in Peshawar.

Englishman Moeen Ali wore those words on his wristband on Day Two of the third Test against India at Southampton, 2014, to draw international attention to the conflict in the Middle East.

Pakistan batsman Ahmed Shehzad advising Tillakratne Dilshan as the teams were returning to the pavilion at the end of the third One-Day International in Dambulla during Pakistan’s 2014 tour of Sri Lanka.

Kevin Pietersen on his former England team-mate, vice- captain and wicketkeeper, Matt Prior, in an exclusive interview to The Telegraph in October 2014. 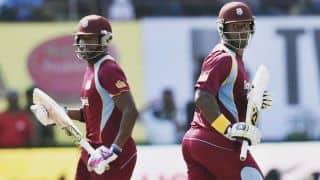