Best bowling figures by a chinaman on debut & 15 other statistical highlights from Sri Lanka vs Australia, 1st Test

Best bowling figures by a chinaman on debut & 15 other statistical highlights from Sri Lanka vs Australia,

Here are some intriguing statistical facts from 1st Test between Sri Lanka and Australia at Pallekele.

The first Test between Sri Lanka and Australia at Pallekele ended in quite a dramatic way. Batting first, Sri Lanka were bowled out for a paltry 117, followed by Australia getting all out for 203. In the second innings, Sri Lankan batsman Kusal Mendis played an excellent knock of 176 runs and ensured the lead of 267 runs, which was enough for the host bowlers to change the course of match. Australian batsmen failed in front of spin duo of Rangana Herath and debutant Lakshan Sandakan, who took eight wickets together in the final innings and Sri Lanka won the match convincingly by 106 runs. With this emphatic victory for Sri Lanka against Australia, plenty of stats entered the record books and Abhishek Kumar presents such statistical highlights from the match.

2. First instance since 2003, when two players made their Test debut for Sri Lanka. Dhananjaya de Silva and Lakshan Sandakan were the debutants from Sri Lankan team in this match.

4. Sri Lanka were bowled out for 117 in 34.2 overs in the first innings of the match. This is the least number of overs faced by Sri Lanka side in Test after electing to bat first.

6. Sri Lanka’s new bowling sensation Sandakan took four wickets by conceding 58 runs in the first innings. This is the best figures by a Chinaman bowler on his Test debut. Sandakan’s figures of four for 58 are second best by a Sri Lankan spinner on debut after Upul Chandana (six for 179 vs Pakistan in 1999).

7. This was also third instance of two left arm spinners taking four wickets in the same innings of a Test. Herath and Sandakan took four wickets each in the first innings. The first two left arm spinners to do that in Tests were Frank Woolley and Roy Kilner against Australia for England in 1925 and second were Hedley Verity and James Langridge again vs Australia for England in 1934.

8. This was first instance of no Australian batsman scoring 50 or more in an innings against Sri Lanka in Sri Lanka.

9. The Pallekele Test was also the first instance of top three batsman of Sri Lankan Test side getting out for single digit in both the innings of a Test.

11. Mendis became the first Sri Lankan batsman to complete his maiden Test century with a six after Duleep Mendis and Aravinda de Silva.

12. Mendis scored 176 in the second innings of the match. This is the highest score by a Sri Lankan batsman at home against Australia and second highest overall after Kumar Sangakkara’s 192 at Hobart in 2007.

14. In the final innings of the match, Peter Nevill and Steve O’Keefe played more than 20 consecutive overs without scoring any run. This is first instance in Test history when more than 17 overs went without any run.

15. The Test also marked first instance in Sri Lanka when 15 wickets were taken through LBW in any Tests. 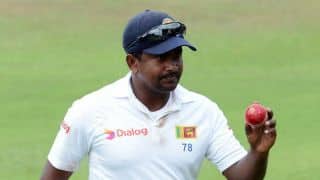