On this occasion, many current and formers cricketers took to social media to pay homage to this legendary boxer. We present you some of the tweets from social media zone.

If Sachin Tendulkar is considered to be God of cricket then Muhammad Ali is surely should be called the same when it comes to Boxing. The entire sports world plunged into collective gloom at the passing away of one of the greatest boxer Muhammad Ali. He is widely considered as the greatest heavyweights in the history of sport. He was one of the most controversial character during his early days of his career.

Ali was an inspiration and idol to many sportsman and a personality like him will be always remembered.  He was battling with his life since last night at Phoenix-area hospital. He was hospitalised earlier this week for a respiratory ailment. On this occasion, many current and formers cricketers took to social media to pay homage to this legendary boxer. We present you some of the tweets from social media zone.

Who threw it better?
Inspirational men who fought for many, legends! Let’s not disappoint them! #inspire
RIP pic.twitter.com/7vsupvPQSa

He represented HUMANITY and all its splendor. A GREAT teacher. The deeply LOVED.. #MuhammedAli . pic.twitter.com/3r5QDvbit4

The man. The legend, not just for his fighting ability but his general attitude in life. #RIPMuhammadAli pic.twitter.com/Bf2roHktMM

RIPMuhammadAli #respect great sports person taught so many lesson to all of us #PeaceAndLove pic.twitter.com/M7eusCgpuU

Great man Muhammad Ali lost his last fight but will be in our hearts for ever. ” float like a butterfly sting like a bee” #RIPMuhammadAli

Sad to hear about the legend Mr Muhammad Ali.. My prayers are with his family… May Allah grant him jannat e firdaous… #RIPMuhammadAli

#May his soul rest in peace ameen# pic.twitter.com/V4xkjicXqO

A true legend who inspired so many. Gone but never forgotten. #RIP https://t.co/kHMieLUY0l

People don’t realize what they had got till its gone . There was no one like him RIP Muhammad Ali pic.twitter.com/JCe0oqtssC

U sure did make ur days count !! Rest In Peace #MuhammadAli #GreatestOfAllTime pic.twitter.com/SZsAYMYld4

“Champions aren’t made in gyms. Champions are made from something they have deep inside them – a desire, a dream, a vision”#RIPMuhammadAli — Stuart Meaker (@SMeaker18) June 4, 2016

Not just a great boxer but also an amazing human being #MuhammadAli.My prayers r wd his family.His wise words r going 2 stay wd us 4ever RIP

Pretty sure the word ‘GREAT’ was invented for one man …. #RIPMuhammadAli — Michael Vaughan (@MichaelVaughan) June 4, 2016

The biggest truth is that we all have to depart from this world to the hereafter..Mr Mohammad Ali, Allah grant him highest level in heaven. — Saqlain Mushtaq (@Saqlain_Mushtaq) June 4, 2016

Rest In Paradise #MuhammadAli easily the most recognised sportsman of all time! You will never be forgotten. #RIPAli — Megan Schutt (@megan_schutt) June 4, 2016

2/2 Ali was a man of strong convictions. He refused to fight in Vietnam saying the memorable words: “no Vietcong ever called me a nigger”. — Imran Khan (@ImranKhanPTI) June 4, 2016

I once met Muhammad Ali in of all places Lahore in Pakistan. He still had mischief in his eyes and sparkle in his feet – THE GREATEST — Derek Pringle (@derekpringle) June 4, 2016

An inspiration to all.. One of the greatest sportspersons to have walked on to the earth..#RIP @MuhammadAli — Pragyan Ojha (@pragyanojha) June 4, 2016

RIP MUHAMMAD ALI. U taught many of us how 2 b urself & n still b the best in the world. #MuhammadAli pic.twitter.com/NNruVnAo6P — Ahmad Shahzad (@iamAhmadshahzad) June 4, 2016

Shocked to hear about Muhammad Ali’s death ! One of the greatest sportsman of all time a legendary boxer , may his soul rest in peace — yuvraj singh (@YUVSTRONG12) June 4, 2016

“If you even dream of beating me, you’d better wake up and apologize.” – Muhammad Ali #RIP #TheGreatest pic.twitter.com/yrGJ3AiMlL — Parvinder Awana (@ParvinderAwana) June 4, 2016

There will never be anyone like him. Simply “The Greatest Of All Time.” God Rest your soul Muhammad Ali #FloatLikeAButterflyStingLikeABee — Alan Wilkins (@alanwilkins22) June 4, 2016

No one ever doubted that you were and always will be the GREATEST #RIPMuhammadAli #champ pic.twitter.com/LzpLijYO3o — Herschelle Gibbs (@hershybru) June 4, 2016

One of the greatest ever passes over #MuhammadAli. may his soul always rest in peace. God bless — Kartik Murali (@kartikmurali) June 4, 2016

RIP to Muhammad Ali it’s hard to believe he is gone. Praying for his family and friends as they go through this trying time. — Sanath Jayasuriya (@sanath07) June 4, 2016

The Greatest is no more…but his greatness will remain etched in our memories forever. R.I.P. Mo Ali. — Aakash Chopra (@cricketaakash) June 4, 2016

Greatest sportsman of all time! May his soul rest in peace #MuhammadAli — Anil Kumble (@anilkumble1074) June 4, 2016

A man who inspired millions and millions of people is no more.The legend of Muhammed Ali will live on https://t.co/tYIzMNdKn2 Sir — Ashwin Ravichandran (@ashwinravi99) June 4, 2016

Had this pic on my wall as a kid – you inspired millions of people around the globe. An absolute legend #RIP pic.twitter.com/wj7arvqPij — Mitchell McClenaghan (@Mitch_Savage) June 4, 2016 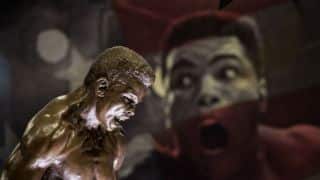