A commentator and presenter for many years, Harsha took to Dubsmash and enacted Ravi Shastri’s famous lines in the World Cup 2011 final.

Dubsmash is the new trend and has caught the big celebrities in its web. Cricket and Bollywood have always shared a close connection and stars from both the sides have gleefully jumped into the Dubsmash wagon. Its latest victim is Harsha Bhogle. He may not have played the game at a very high level but he’s undoubtedly one of India’s cricket faces. A commentator and presenter for many years, Harsha took to Dubsmash and enacted Ravi Shastri’s famous lines in the World Cup 2011 final, when Indian skipper MS Dhoni struck that winning six to seal the game. Rohit Sharma’s hilarious Dubsmash attempt

The act was a part of Castrol Cricket’s latest contest — #ActivCricketSmash, which the company claims is the “the most exciting thing in cricket since T-20!” All one has to do is log-on to Dubsmash and upload a video aping a great commentator during a historic moment. Shoaib Malik, Sania Mirza get the ‘party’ rolling on Dubsmash

Watch the entertaining video and hear it from Harsha himself. Check out other Dubsmash videos 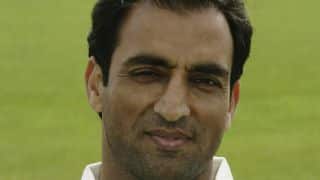 Pakistan vs England 2015, 3rd Test at Sharjah: Wahab Riaz vs Joe Root and other key battles