Eddie Paynter: 15 facts about the Englishman who became a legend even after starting late

Eddie Paynter: 15 facts about the Englishman who became a legend even after starting late

Edward ‘Eddie’ Paynter was a former England batsman and a cricketing great who is best known for playing outstandingly well during the famous ‘Bodyline’ series.

Edward ‘Eddie’ Paynter, born November 5, 1901, was a former England batsman and a cricketing great who is best known for playing outstandingly well during the famous ‘Bodyline’ series. Paynter, a county legend, played First-Class cricket for Lancashire between 1926 and 1945. It is astonishing that someone who made his First-Class debut at 24 achieved such heights in the game. He averaged 84.42 from 7 Tests against Australia, a feat which no other Englishman has replicated with a 500-run cut-off. On his birth anniversary, we look at 15 interesting things to know about the great man who once scored a First-Class triple century in just five hours.

1.  Early life: Paynter was born at 14 Horton Street, Oswaldtwistle, Blackburn, Lancashire as the third child of Arnold and Mary (née Thomson). His elder brother Arundel was an excellent left-arm fast bowler, who unfortunately died during the World War I on July 31, 1917. Eddie went to Mount Pleasant School in Enfield.

2.  Dropping-out from school and injury: Eddie dropped-out of the school early to work in a cotton-spinning mill, but a freak injury at the mill at an age of 18 ended in him losing ends of index- and middle-fingers of his right hand. A resolute Eddie still joined the Enfield Cricket Club. At that time, his father was the captain of club’s second XI. Eddie was promoted to the first XI by next season.

3.  The first call: At 19, Eddie was called to Old Trafford to join a coaching camp, where he was coached by Johnny Tyldesley and Thomas Lancaster.

5.  The historic Test: During the fourth Ashes Test at The Gabba from the 1932-33 series, which famously (or infamously, depending on your perspective) went on to be known as the ‘Bodyline series’, Paynter got his name etched permanently in the chronicles of cricket. He went into the match with a sore throat and developed tonsillitis as the match progressed. He was admitted to the hospital, but as his team needed his services, he asked Bill Voce — who was also injured and was giving him company in the hospital — to get a taxi for them to go to the ground at his own risk.

Paynter arrived at The Gabba just when England lost their fifth wicket on 198, still trailing by 142 in pursuit of Australia’s 340. He took a quick warm shower and a diet of eggs, brandy, and champagne, and got ready for taking the field, leaving his team-mates surprised.

Paynter finally fell for 83, helping England cross Australia’s 340. The 16-run lead helped the target to come down to 160 as Australia capitulated meekly in the hands of Larwood and Allen. Once again, as his side was in a spot of bother, Paynter walked out and immediately sealed the matter with 2 sixes, the second of which — off Stan McCabe — brought up the winning runs. The Ashes was regained, rather fittingly, in the hands of Paynter. He returned to the chants of “well done, Eddie” from the crowd.

6.  Broke the law of ‘averages’: Paynter averages 59.23 in the 20 Tests that he played and sits on the fifth spot in the list of all-time highest averages in Test cricket, behind Don Bradman, Graeme Pollock, George Headley and Herbert Sutcliffe. Furthermore, when it comes to highest averages in Ashes, Paynter is behind only Bradman, who averages a mammoth 89.78. Paynter isn’t far behind with his average of 84.42.

8.  A quick fire triple: When Lancashire scored 640 for 8 in a single day against Sussex at Hove, Paynter scored 322 in 300 minutes that (five hours, to be precise). On the same day (July 28, 1837) Roger Moore scored 316 for Hampshire vs Warwickshire at Bournemouth. For the first time two men scored 300s in the same day of the Championship.

9.  Ashes highest: At Trent Bridge Test from the 1938 Ashes, Paynter scored 216 not out form 333 balls, the then highest for an Englishman in a home Ashes Test.

10.  All-rounder: In the next Test at Lord’s, England’s regular keeper Les Ames broke his finger. Paynter kept wickets in his place throughout the second innings. In the 48.2 overs he kept wickets for, he conceded just five byes and took a catch.

11.  The bet: The 1938 Ashes was Paynter’s last. England levelled the series at The Oval, thanks to Len Hutton’s mammoth 364. Paynter and Denis Compton waited with their pads on for close to two days, as they saw Hutton play an endless innings.

To add some fun to an otherwise tepid time, a bored, exasperated Paynter challenged Compton: “Denis, I bet you a pound you and I don’t make ten between us!” As things turned out, Paynter fell for a duck and Compton scored 1 even as England went on to amass 903 for 7.

12.  African Safari: In South Africa in the year 1938-39, Paynter scored 653 runs at 81.62. It remained a record for an English batsman in South Africa till former captain and current Director of English cricket Andrew Strauss scored 656 in the year 2004-05.

13.  Post-cricket: Paynter did not serve in World War II. He got a benefit season from Lancashire in 1945 and earned £1,078 during the season. In the year 1950-51, he toured India as Assistant Manager with the Commonwealth XI, but ended up playing two matches. 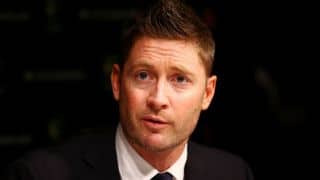 Michael Clarke: Australia vs New Zealand 2015 series will be competitive