Gautam Gambhir might not have called time on his playing career but he's already preparing for his second innings.

Gautam Gambhir might not have called time on his playing career but he’s already preparing for his second innings. As per a report, Bharatiya Janata Party (BJP) could field the cricketer as their candidate in the next general elections from Delhi.

Gambhir has been quite vocal on issues of national importance and never shied away from making his opinion known.

According to a report in Dainik Jagran. BJP wants to have the 36-year-old left-handed batsman as their star candidate in a state where they have failed to come to power for almost two decades now. Aam Aadmi Party (AAP) is the ruling party in the national capital.

Gambhir is yet to quit his cricketing career that began in 2003. So far, he has played 58 Tests for India, scoring 4154 runs with nine centuries and 22 fifties. In 147 ODIs, he has 5238 runs along with 11 hundreds and 34 half-centuries. He has also represented India in the shortest format with 37 T20Is to his name and scored 932 runs with the help of seven half-centuries.

Gambhir is a double world cup winner he was part of the Indian teams that won the inaugural ICC World T20 in 2007 and the 50-over World Cup at home in 2011. He was India’s top-scorer in both the finals of the events. Apart from that, he has also tasted success in the Indian Premier League (IPL) where under his captaincy, Kolkata Knight Riders won two titles in 2012 and 2014. He returned to his old franchise Delhi Daredevils in 2018.

Gambhir last played for India against England in the Rajkot Test in 2016. 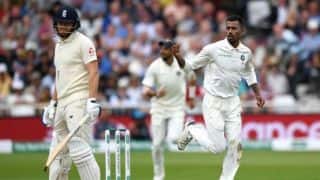