George Hirst was one of the greatest all-rounders cricket has seen. His Test numbers were not outstanding, but at domestic level he was a giant, as a tally of 36,356 runs at 34 and 2,742 wickets at 19 suggest.

Born September 7, 1871, George Herbert Hirst was one of the greatest all-rounders cricket has seen. His Test numbers were not outstanding, but at domestic level he was a giant, as a tally of 36,356 runs at 34 and 2,742 wickets at 19 suggest. Hirst was also the man who converted swerve bowling into an art, and challenged the stature of Wilfred Rhodes as the greatest contemporary all-rounder. Between them, Hirst and Rhodes formed one of the most lethal pair of all-rounders in history, and converted Yorkshire into the most formidable county side of their times (they won 14 of their 34 Championship titles during Hirst s tenure). Abhishek Mukherjee narrates 19 facts about the legend from Kirkheaton.

Kirkheaton is an innocuous village about 5 km east of Huddersfield, but it prompted AA Thomson to make that famous statement in Hirst and Rhodes: Nobody knows the name of the world s greatest all-round cricketer. All we know for certain is that he batted right hand, bowled left and was born in Kirkheaton.

The statement, of course, refers to both George Hirst and Wilfred Rhodes, of whom it was difficult to choose who the greater all-rounder was. Kirkheaton also boasts of Allen Hill, who played the first 2 Tests in history.

Well after Hirst and Rhodes became legends, they kept on playing for Kirkheaton. When they played Kirkheaton thrashed all who dared to cross their way. For example, bowling in tandem in a Huddersfield and District Cricket League match on April 30, 1904, Hirst and Rhodes skittled out Slaithwaite for 9, of which four were extras. Hirst had 5 for 2, and Rhodes, a mere 4 for 3.

As for why they played for Kirkheaton after attaining stardom, the answer is provided by Harry Pearson, in his wonderful work Slipless in Settle: a Slow Turn around Northern Cricket: felt they owed Kirkheaton a debt and playing was their way of paying it off. The Kirkheaton CC pavilion is, quite obviously, called The Hirst and Rhodes Pavilion.

To give an idea of how good a player Hirst was, it should suffice to say that he is one of only three cricketers to do the 30,000 run-2,500 wickets double in First-Class cricket, the others being Rhodes and, of course, WG Grace. He also did the 1,000 run-100 wicket double in 14 separate seasons. Lord Hawke called him the greatest county cricketer of all time.

When he got his 200th wicket in August, he was asked whether his feat will be replicated. He responded with I don t know, but whoever does will be very tired. Fred Trueman almost echoed these lines once he made to the 300-wicket mark.

When Bob Appleyard took 200 wickets in 1951, he admitted: I was absolutely jiggered after what I d done. How he had the energy to bat as well I can t imagine. Appleyard, one of those ubiquitous bunnies, scored a mere 104 in the entire season.

If one thought Hirst s 1906 feat was surreal, the match against Somerset at Bath that season was outrageous. In that match he scored 111 and 117*, and picked 6 for 70 and 5 for 45. He remains the only cricketer with 2 hundreds and 2 five-fors in the same First-Class match.

Note: Bernard Bosanquet and Franklyn Stephenson have also scored two hundreds and have taken 10 wickets in the same match, but none of them has taken five wickets in each innings.

For a man of his stature, Hirst was remarkably humble. When Thomson, his biographer, enquired of the performance at Bath, Hirst responded: Ah, you should have seen my figures in that (1901) Somerset match 1 for 189.

Writing for CricketCountry, Arunabha Sengupta called Hirst pioneer of the swerve . It will not be an exaggeration to claim that nobody mastered the art of moving the ball in air to that extent before Hirst appeared on the scene.

Thomson compared Hirst s swerve (swing) to Bernard Bosanquet s invention of the googly. So prodigious was his swing that Sammy Woods once asked in despair: How the devil can you play a ball that comes at you like a hard throw-in from cover-point?

He bowled to a leg-trap. He usually had two or three short-legs, a short fine-leg, a deep fine-leg and a deep square-leg. This was similar to Bodyline, the only difference being that Hirst s field placement was a product of the swerve.

Note: Hirst did not invent the swerve. Noah Mann, an underarm left-handed bowler of Hambledon, is usually credited with that. But nobody popularised the swerve and used it to such phenomenal success the way Hirst did.

We all remember Gilbert Jessop s massacre at The Oval, 1902. Chasing 263 England were 48 for 5 when Jessop joined Stanley Jackson. When he left after a whirlwind 77-minute 104 the score read 187 for 7. There was still work to be done when Rhodes joined Hirst: the last wicket needed to score 15.

Folklore has it that Hirst greeted Rhodes with the words we ll get em in singles . This is untrue. In an interview with David Frith, Rhodes statement was clear: No, we didn t say that. That would not have made any sense, would it? We might have got a two.

11. The bout that never happened

Poor Joe Darling lost all five tosses to Jackson in the 1905 Ashes. Imagine his frustration when he got to know that Jackson would lead CI Thornton s XI in the Scarborough Festival match as well. A desperate Darling came out in a towel with the proposal: I m not going to risk the toss this time, except by wrestling.

Jackson (who, incidentally, shared date of birth with Darling: both were born August 21, 1870) agreed, on one condition: Hirst would fight Darling. The muscular torso and the broad shoulders of the Yorkshireman (Wisden called Hirst a small Hercules ) ensured Darling stuck to the more conventional method of the toss of a coin.

Hirst worked in an ammunition factory in Huddersfield during the Great War (Rhodes and Schofield Haigh were his colleagues). During The War Hirst and Rhodes also continued as Yorkshire professionals, playing on Saturdays.

After World War I, however, Hirst resumed his County Championship career, but more interestingly, played in the Bombay Quadrangular in 1921-22 for Europeans. With him was his old mate Rhodes as well as the great CB Fry. Hirst took 7 wickets against Hindus (6 bowled), and scored 62 and took 3 wickets (2 bowled) in the final against Parsees. Europeans won the title comfortably.

13. It backfired for Jackson…

Jackson, Hirst s captain, stood as a candidate for Leeds Municipal Election. When he asked Hirst to speak, the legend s words were on these lines: Ladies and gentlemen. Mr Jackson s a fine man and a grand cricketer, but if you get him on this council he ll play less cricket and that ll be a bad thing for Yorkshire, England and everybody. So don t vote for him, any of you.

Sengupta mentions another incident in CricketCountry. Yorkshire were playing Surrey at The Oval. In the crowd was a Kirkheaton bandman called Harry Stead when a message reached his home: Stead had been ordered to the barracks.

Clueless on how to reach her husband, Mrs Stead sent a telegram to Hirst. The great man was patrolling mid-off when it reached him. He calmly told the telegram boy: Sitha, go around the boundary and whenever you see a soldier in a red coat ask him if his name s Harry and if it is tell him to get off home like billyho. And if two other chaps called Harry went running home to their misuses it wouldn t do em any harm.

15. Not quite the carrier

Roy Hattersley, in his In Search of England, mentioned a rather unusual superstition of Hirst. Despite not being one to shy from sweat and toil, Hirst had a strange idiosyncrasy: he never carried his cricket kit to the tram stop.

With success came fame, and with fame came money. His benefit (1904), for example, yielded a purse of 3,703. Not only was Hirst a professional for Yorkshire, he also modelled for Yorkshire toffee, smiling at children from the tins. The fitting tagline of the product was UNRIVALLED … ALWAYS RELIABLE.

Note: The smile was as famous as the person himself. Lord Hawke once said that Hirst s smile went right round his head and met at the back.

17. The reason behind his success

Cricketers have often attributed their success to unusual products. Richie Benaud, for example, was suggested a combination of Oily Calamine Lotion and boracic acid powder. Hirst s success was apparently due to neatsfoot oil ( a yellow oil rendered and purified from the shin bones and feet, but not the hooves, of cattle, to quote Wikipedia).

Hirst had married Emma Kilner in 1896. They had three children James (born the same year), Annie (born 1899), and Molly (1906). Post-retirement, Hirst became an avid gardener and was a keen follower of Mrs Dale s Diary on the radio.

However, he was also a surprisingly good tenor, and was accompanied by his daughters Molly and Annie on the piano a gift from Yorkshire CCC. 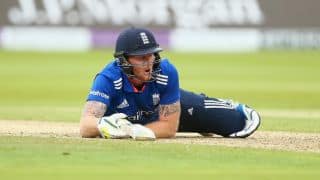 Ben Stokes: I was just defending myself from getting hit