Jos Buttler expects England to bounce back in their ICC Cricket World Cup 2015 campaign, saying playing under pressure may just be what the struggling team needs ahead of the last two must-win games.

Jos Buttler expects England to bounce back in their ICC Cricket World Cup 2015 campaign, saying  playing under pressure may just be what the struggling team needs ahead of the last two must-win games.

England have just won once in four Pool A matches and must defeat Bangladesh in Adelaide on Monday and Afghanistan in Sydney onMarch 13, if they want to stay alive in the mega event. Even if England win those two matches, it may not be enough as Bangladesh have 5 points in their bag and if they upset co-hosts New Zealand, they go through. But wicket-keeper Buttler said England were confident and can turn the tables.   (ICC Cricket World Cup 2015: Points Table)

“We are confident about ourselves and back the quality we have,” Buttler was quoted in a report from Cricketcountry.com.

“We have not played as well as we should have, or would have liked to, but if we get near our best in these two games you would think we’re strong enough to come out on top. We have got to win two games of cricket and maybe it’s good to have that pressure on ourselves. Hopefully, that will bring out the performance that we need. In simple terms, we have got to play better than we have so far to get through to the quarter-finals.”

England have fielded the same playing 11 in all four games,but Buttler suggested that changes could be made in order to find the perfect side. He also said the players sidelined so far were waiting to get a chance and hoped the competition for places would benefit England.

“The guys who are not in the side are desperate to put their hand up to say they should be playing, and the guys who are in the side and have not performed as well as they would have liked, want to get some form.That makes for healthy competition for the team,” he said.

The wicket-keeper backed Hales saying, “He is an explosive player and will be a fantastic player for England in the future,as Hales is set to replace the struggling Gary Ballance. I think he enjoys the big occasion. There was that fantastic hundred he got against Sri Lanka in the World Twenty20 last year against what turned out to be the champions. If he gets his chance I am sure that having sat on the sidelines for a while he will be desperate to do wel,” Buttler added. 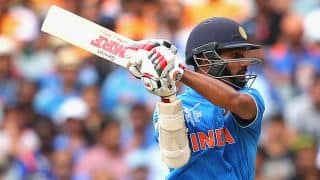