Both the teams won their first ICC World Cup 2015 encounters.WhileIndia got the better of nemesis Pakistan, South Africa defeated Zimbabwe in a closely fought contest.

Both the teams won their first ICC World Cup 2015 encounters.WhileIndia got the better of nemesis Pakistan, South Africa defeated Zimbabwe in a closely fought contest.India are placed above South Africa in the Pool B points table owing to a higher net run-rate.

Going by the past head-to-head clashes in World Cup, the Proteas have an upper hand over the defending champions with three out of three wins in the 1992, 1999 and 2011 World Cup games. Nonetheless, there have been some memorable moments in these games and Sunday’s clash will definitely be one of the most awaited games of this tournament.

Tulika Bhattacharya lists out the past encounters between these two sides in World Cup matches.

The 1992 edition was the first time coloured clothing came into play in World Cups and saw South Africa making their first appearancein the mega event after missing out 21 years – from 1970 to 1991 – because of the apartheid policies of the former government.

Pitted against the Indians, they chose to field first after winning the toss in the rain-curtailed match. Playing 30 overs, India put up 180 for six with captain Mohammad Azharuddin top-scoring with a 77-ball 79. Kapil Dev supporting him with a quick 29-ball 42.

The Proteas chased down the 181-run target in 29.1 overs, losing four wickets on the course. Peter Kirsten was declared as the Player of the match for his match-winning 84 from 86 balls.

They met after seven years in a World Cup match. Batting first, India scored 253 for the loss of five wickets in their quota of 50 overs. South Africa’s Lance Klusener picked up the crucial wickets of wickets of Sachin Tendulkar (28), Mohammad Azharuddin (24) and Rahul Dravid (54). Sourav Ganguly, top-scored for India with 97 and was brilliantly run-out by Jonty Rhodes.

In the end, it was a comfortable chase for the Proteans, who finished it off in the 48th over with Jacques Kallis scoring 96. Jonty Rhodes chipped in with a quick 39 off 31 and Lance Klusener, who later became the player of the tournament, hit an unbeaten 12 from 4.Co-incidentally, both the top scorers from their respective teams (Ganguly, 97 and Kallis, 96) were run out in the match.

This was the only match that India lost in this edition in the World Cup. After winning a crucial toss and being well placed at 267 for one in the 40th over. Sachin Tendulkar scored 111, and Virender Sehwag and Gautam Gambhir chipped in with fine 73 and 69 respectively.

Tendulkar fell at the score of 267 and Nagpur witnessed a heart-breaking collapse. India lost the plot and were bowled out for 296 in the 49th over, as Dale Steyn ran through their batting line-up.With Tendulkar and Gambhir at crease, India looked set to pas 350

Though India tried defending the total with some tight bowling and fielding until the very end, the match wentdown to the wire with South Africa needing 13 runsoff the last over to seal it.

South Africa held on to their nerves as they defeated India by three wickets with just two balls to spare. Dale Steyn’s superb fifer won him the man-of-the-match. 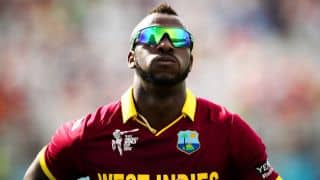