However, it was not to be for the Rohit Sharma-led unit as Kane Williamson s side secured a four-run win to clinch the series. (ALSO READ: It would have been nice to win the series and go home and play Australia: Rohit Sharma)

While Dinesh Karthik scored a quickfire 33 (unbeaten) off 16 balls, the diminutive wicketkeeper-batsman, who is mostly playing as a batsman in India s limited-overs side these days, he was trolled as India lost the game. (ALSO READ: 3rd T20I: New Zealand avoid Karthik scare to clinch series against India)

The Twitter trolls came down heavily on Karthik after he refused to take a single on the third ball of the final over as India needed 14 runs off 4 balls and sent Krunal Pandya, who to his credit had brought India in touching distance of a win with an unbeaten knock of 26 off 13 balls. (ALSO READ: India vs New Zealand, T20Is Statistical Review: Blackcaps’ T20I dominance, Dhoni s 300 and Rohit s record)

While it was clear that Krunal was not too pleased, Karthik s actions sent Twitter into frenzy, with some of the fans criticising him whether he is MS Dhoni one of the finest finishers in the limited-overs cricket.

Former cricketer-turned-commentator Sanjay Manjrekar tweeted, Brilliant hitting by DK but small mistakes have a big effect on the result in T20s. Was a mistake to not take that single with Krunal at the other end.#IndVsNZ.

However, some of the other Twitter users were not that impressed with Karthik. 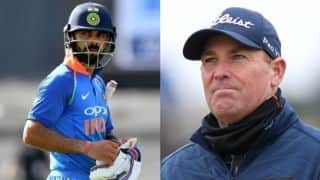