KKR were off to a good start and reached to 60 for two in the seventh over but then began a collapse courtesy some good swing bowling from Sandeep Sharma.

The role of all-rounders is extremely important in the game of cricket and if it is the shortest format, Twenty20 (T20), then the need for utility cricketers is even more. Saturday was such a day in the eight edition of Indian Premier League, which saw two solid all-round performances.In the first match, Delhi Daredevils (DD) skipper JP Duminy scored a useful fifty and picked up four wickets to guide his side to their second win this season, and in the second game, it was Kolkata Knight Riders’ (KKR) Andre Russell who scripted an empathic win for the defending champions against previous edition runners-up Kings XI Punjab (KXIP).

KKR’s Gautam Gambhir elected to field and right from the first over KXIP were pushed to the back foot when Umesh Yadav dismissed opener Murali Vijay for duck. KXIP kept losing wickets and once again their skipper George Bailey came to the side’s rescue. He scored 60 from 45 balls to take KXIP to 155 for 9 in 20 overs. Yadav picked up three wickets, while Morne Morkel and Russell picked two each. Sunil Narine was once again economical and finally got his first wicket when he dismissed Axar Patel.

KKR were off to a good start and reached to 60 for two in the seventh over but then began a collapse courtesy some good swing bowling from Sandeep Sharma. In the end of the eighth over they found themselves struggling at 60 for 5. Russell and Yusuf Pathan then went on to add 95 from 60 balls to help KKR secure their second win in this tournament.

Turning point: KKR needed 72 from the last eight overs and they needed one big over to change things. Axar Patel came in to bowl the 13th over and Russell launched an assault. He hit Patel for a six and two boundaries, taking 19 runs of that over to bring the required run-rate under eight. That changed the game in KKR’s favour as they went on to complete the chase in the 18th over. 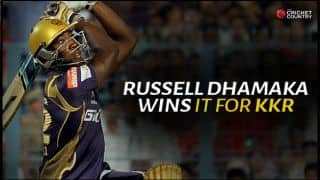