Get the live updates, most hilarious tweets and lot more on match No. 33 of IPL 2016 between Delhi Daredevils and Rising Pune Supergiants here.

Match 33 of Indian Premier League (IPL) will be played between Delhi Daredevils (DD) and Rising Pune Supergiants (RPS) in Delhi on Thursday. Both the teams are at the opposite end of the spectrum, as DD are sitting comfortably at third position in the points table with five wins from their seven games and RPS are struggling with just two wins from eight games.  IPL 2016, Live Streaming: Delhi Daredevils vs Rising Pune Supergiants at Delhi

Hosts DD have had a dream season so far, as they have lost just two games in their campaign. Out of their two losses, one against Gujarat Lions (GL) came by just 1-run’s margin, which shows how good a side they actually are. On form, they are the clear favourites going into this match.

RPS on the other hand have had a forgettable season so far. Half way down in the tournament, they are yet to figure out their best playing XI. Injuries have also marred them as four of their top overseas recruits have left them midway due to injuries. But with solid replacements coming in, RPS will look to bounce back in this match.

The match will begin at 8 PM and is expected to be the top trend on social media. As always, we will bring you the best of the social feeds, including some hilarious tweets, from the match in this space. Enjoy the game with our presentation.

ANOTHER ONE in Perera’s Bag ! #DDvRPS

#rahane ‘s favorite app?? Tinder.. Cause it shows where the hit singles are nearby :).. #VIVOIPL #IPL2016 #DDvRPS #singlesman

Congrats To Mohammed Shami For His Half Century In Just 19 Balls. 😉#DDvRPS #IPL2016 #IPL #RPSvsDD

TAKE A BOW SAM BILLLINGS! What a catch to send MS Dhoni on his way.

DD will win.Billings catch might win them the game. Spectacular catch. #DDvRPS — Athul (@athulpkr) May 5, 2016

Oh Sam Billings! What an asset to have, one of the better catches in this tournament thus far, that! #DDvRPS

IPL is the living example of the fact that if you pay your employees well they will do anything for you.#DDvRPS — ANiKeT (@Aniket_bhau) May 5, 2016

Sam billings be like – Yes i’ m an alien When i’ m touching the earth Call me a spaceman When i travel universe #DDvRPS — Aashish Kushwaha (@iamash_007) May 5, 2016

Ishant Sharma on the way to send friend request to Mohammed Shami..#DDvRPS

Md. Shami trying to impress MS Dhoni, having failed to do it in Indian colours #DDvRPS

#DDvRPS dhoni will be victorious today,,, #RPS had to win all of their remaining games to qualify for play offs — satish kumar reddy (@iamsatish1) May 5, 2016

Very very good strategy by @jpduminy21 to bowl himself ahead of Imran Tahir. Definitely a better bowler. #DDvRPS — Bharat Jain (@Pungebaaz) May 5, 2016

During the drinks break, Saurabh Tiwary has lunch, and during the lunch break, he has lunch again, during tea, he has dinner…#DDvRPS — Gaurav Sethi (@BoredCricket) May 5, 2016

Wat do u guys say, will Rising pune Rise from here on all the way to play off??#DDvRPS #missingcsk — vinothkumar (@vinjaj) May 5, 2016

Even channel is injured now after seeing the injuries of RPS players. NO SIGNALS. #DDvRPS — lucky revanth (@lucky_revanth) May 5, 2016

The #Dilliboys have put up a good total on the board. Time for the bowlers to defend the target! #DDvRPS #DilDilli pic.twitter.com/wECA16f3eB — Delhi Daredevils (@DelhiDaredevils) May 5, 2016

Irfan Pathan is being wasted by Dhoni again and again. #DDvRPS — Sumeet Kadakia (@sumeetkadakia) May 5, 2016

RPS had to win tonight and they will.#DDvRPS — Aneesh Chandoke (@AneeshChandoke) May 5, 2016

Even channel is injured now after seeing the injuries of RPS players. NO SIGNALS. #DDvRPS — Aashish Kushwaha (@iamash_007) May 5, 2016

Bha-Tinda is so Obsessed with X-factor though. Firstly he wanna be a singer. But accidentally #Cricket.#DDvRPS pic.twitter.com/FBIUmOvShg — Sir Rohit Sharma (@SirRohitSharma0) May 5, 2016

If mistiming is an art then Pawan Negi is Picasso of it. -_- #WasteOfNineCrores#DilSeDilli #DravidArmy#DD#DDvRPS — ROCKY (@rockyyadav1) May 5, 2016

#DDvRPS Sony channels blacked out. Protesting against anything? Highly dubious since match is played in Kejriwal’s Delhi. — Arushi Srivastava (@simply_arushi) May 5, 2016

#DDvRPS #duminy typed Ctrl+z to take back Delhi to the old times of failure. — Braja Bihari (坎哈) (@iBrajaBihari) May 5, 2016

Meanwhile Rahul Dravid like to thank Bha-Tinda Express for his last 2 overs. He just did what he is capable of…#DDvRPS#RPSvsDD #IPL — Sir Rohit Sharma (@SirRohitSharma0) May 5, 2016

Interestingly, Perera gets only 1 over. One can never understand Dhoni’s thinking. You can understand @RPSupergiants ? #DDvRPS — Akram Pasha (@akramrockz055) May 5, 2016

The only thing rising in Rising Pune Supergiants is the number of injuries. #DDvRPS — Prafulla Pathak (@TheKnownymous) May 5, 2016

RPS will be Proud with this Bowling effort today. But Ashwin’s still concern for them. #DDvRPS — Sagar Gala (@sagargala1234) May 5, 2016

Run-outs R d new hot favorite in this #IPL2016 Everyone wanna get out in this fashion!!!#DDvRPS#RPSvsDD #IPL — Sir Rohit Sharma (@SirRohitSharma0) May 5, 2016

Seems like the magic of cool caption is not working for the team #rps #DDvRPS — Being Saurabh 27 (@sharmasaurabh73) May 5, 2016

Maxwell would be so proud of that Billings’ dismissal#DDvRPS — Haroon Javed (@Engr__haroon) May 5, 2016

No batsman in #IPL has managed to make two 50+ scores in their first two games Sam Billing was in line to do so. But couldn’t do it.#DDvRPS — Haroon Javed (@Engr__haroon) May 5, 2016 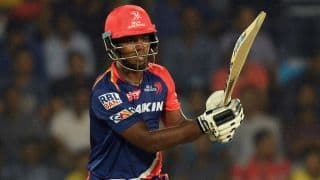