The ‘Nawab of Nazafgarh’ trolled his old friend Nehra with a series of tweets on him. Later, he did not spare KKR bowlers Morkel and Holder, as he tweeted a meme representing the names of the two bowlers.

Former Indian cricketer Virender Sehwag was an out-and-out entertainer during his playing days. When he used to walk out with his willow in hands, crowds were assured of high voltage action as boundaries would rain and runs would flow. The explosive opener, who called it quits to international cricket, has not stopped entertaining the crowds though. ALSO READ: Virender Sehwag, VVS Laxman wish “Nehra ji” speedy recovery.

During the World T20 2016, Sehwag was a revelation in his new avatar of commentator. He made the viewers laugh with his witty one-liners and his funny chemistry with Pakistan speedster Shoaib Akhtar. On Twitter too, Sehwag has never shied away from trolling other cricketers and making his followers roll on the floor laughing.

In recent such incidence, the ‘Nawab of Nazafgarh’ trolled his old friend Ashish Nehra with a series of tweets on him. Later, he did not spare Kolkata Knight Riders (KKR) bowlers Morne Morkel and Jason Holder, as he tweeted a meme representing the names of the two bowlers. The occasion could not have been more apt as KKR locked horns with the Sunrisers Hyderabad (SRH) side in the all-important eliminator for Indian Premier League (IPL) season 9. Check the tweets:

Being a true friend, Sehwag also urged his followers to use #GetWellSoonNehraJi tag and pray for Nehra’s speedy recovery. Nehra recently underwent a knee-surgery in London after an injury had ruled him out of IPL 9. His side SRH emerged victorious in the knock-out match and will now face the Gujarat Lions (GL) in qualifier 2 on Friday. The winner of that game will go on to face the Royal Challengers Bangalore (RCB) in the final on Sunday. 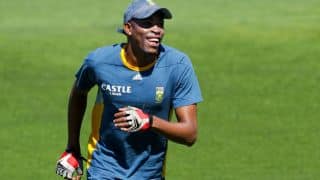