The bandwagon of Michael Clarke’s detractors, seem to only be increasing. After former Australian cricketer Matthew Hayden and Andrew Symonds, it is now the turn of John Buchanan to take a plunge.

The former Australian coach says that Clarke never understood the value or the significance of the coveted Baggy Green.

Sharing an anecdote to News Corp, Buchanan said, “Players like Steve Waugh, Adam Gilchrist, Ricky Ponting and others really tried to make the ‘Baggy Green’ culture something special, but I could sense it was under threat and under Michael’s captaincy I can sense it has disappeared a bit and that disappointed me.” [Also Read: Michael Clarke: 13 controversies involving the Australian skipper]

He further added, “I can remember guys like Hayden and (Justin) Langer sitting him down in a corner and trying to get him to understand what we were trying to achieve.” [Also Read: “Will a hundred at The Oval change things?” Kyly and Shane Warne asked Michael Clarke]

Buchanan also said that he felt ‘Pup’, at times did not know or probably did not want to know.

Earlier, Hayden’s claim of ‘ruffled feathers” and Symonds’ view that he was not a “natural leader”  has already created news and now with Buchanan budging in, it seems the Ashes 2013-14 and the World Cup 2015 winning captain war has many critics. [Also Read: Michael Clarke: 10 statistics that dazzle in his fabulous career] 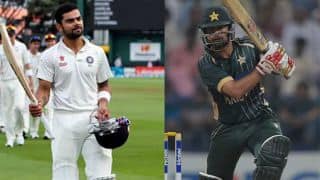 Virat Kohli and I should not be compared: Ahmed Shehzad