Dilshan will be surely missed for his contribution to the Sri Lankan team over the years.

He will bid adieu to international cricket on September 9 after playing the second T20I against Australia at Colombo. After Dilshan, there will be no Sri Lankan cricketer left in the current team who made his debut before 2000.

Dilshan made his international debut in a Test against Zimbabwe on November 18, 1999 and ODI debut against the same team on December 11, 1999. Since then, he has been one of the main players for Sri Lanka across the formats. He is the fourth Sri Lankan to have amassed more than 10,000 runs in ODIs. ALSOREAD: 11 facts about the Sri Lankan all-rounder — Tillakaratne Dilshan

At the age of 39-years, Dilshan will be surely missed for his contribution to the Sri Lankan team over the years. With the arrival of the news of his retirement, cricket fraternity once again came together to congratulate the cricketer for his 17-year long international career.

A full house, a win and all of Sri Lanka applauding @TmDilshan_23 in his last ODI. He and @sanath07 have been our greatest match winners

SLC dedicates the 3rd ODI vs Aus to the retiring master batsman T.M. Dilshan for the services rendered to the motherland through cricket.

President of SLC Hon. Thilanga Sumathipala extends appreciation of himself & the committee to Dilshan for his service to cricket in SL.

Wonderful servant for SL cricket. Naturally gifted player. Was absolute pleasure playing with him. Wish @TmDilshan_23 all the best. enjoy! 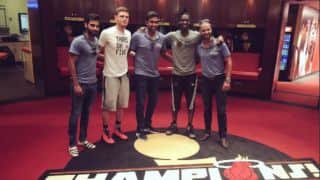