Not since Lieutenant Colonel Sir Vijay Ananda Gajapathi Raju, better known as Vizzy, has a cricket administrator been as universally mistrusted as N Srinivasan.

Not since Lieutenant Colonel Sir Vijay Ananda Gajapathi Raju, better known as Vizzy, has a cricket administrator been as universally mistrusted as N Srinivasan. From charges of conflict of interest to outright corruption, Srinivasan is a highly unpopular figure in world cricket.Shiamak Unwalla lists out the various controversies of the man the cricketing world fears most:

The fact that Chennai Super Kings (CSK) was owned by N Srinivasan’s company India Cements while he was the chief of the Board of Control for Cricket in India (BCCI) was ethically a huge transgression. The Supreme Court, while announcing its verdict on the Indian Premier League (IPL) 2013 Spot-fixing and betting scandal, did not indict him on corruption and betting charges. However, Srinivasan passed off his son-in-law Gurunath Meiyappan — facing serious charges — as a “cricket enthusiast”  when in reality he was CSK’s team principal. It was condemned by the SC. Meiyappan was arrested for the charges as well.

Jaganmohan Reddy is the son of late Andhra Pradesh Chief Minister YS Rajasekhara Reddy. Srinivasan’s India Cements was allegedly one of the many companies that invested heavily in Jaganmohan’s businesses in exchange for favours from his politician father. Srinivasan had to appear in court about the same.

Srinivasan entered cricket administration in the early 2000s. He was elected president of Tamil Nadu Cricket Association (TNCA) soon thereafter, and by 2005 was Treasurer of BCCI. Srinivasan has been accused of manipulation on a large scale. In order to dip into the IPL honey pot, he changed an IPL regulation that said that no administrator should have either direct or indirect business interest in matches or events conducted by BCCI. Srinivasan was soon BCCI president, and his alleged corruption did not end there. Despite all the heat brought about by the IPL 2013 spot-fixing and betting scandal, Srinivasan maintained that he had done nothing wrong. He said he refused to be “railroaded” by “unfair and motivated attacks.” However, the Supreme Court, in its 2014 verdict on the case, called Srinivasan’s involvement as BCCI president “nauseating.”

Srinivasan was elected as the first-ever Chairman of the International Cricket Council (ICC) in 2014; this after the Supreme Court of India had barred him from being president of BCCI. His appointment followed a massive change in ICC’s functioning as BCCI, England Cricket Board (ECB) and Cricket Australia (CA) formed what has since been called “The Big Three.” What this means is that these three boards will be permanent fixtures on the Executive Committee and Financial & Commercial Affairs Committee, both of which take a number of calls on numerous important ICC matters. The Big Three would take the highest cut out of revenue earned by ICC.  The move was ultimately a “democratic” one, though Sri Lanka Cricket (SLC), Cricket South Africa (CSA), and Pakistan Cricket Board (PCB) opposed it initially. Ultimately though, all the other boards bowed to them. Cricinfo reported one representative saying, “Were all lambs and said ‘yes’ in all the right places.”

5:  Srinivasan and Ashwin
Srini’s son Ashwin, who came out as a homosexual, alleged that his father tried to “cure” him of his homosexuality. Failing that, he had Ashwin and his partner beaten up, and subsequently cut him out from the family fortune. Ashwin was quoted by DNA saying, “I want our freedom and our lives back and also the rightful share in the family wealth.”

Following the Supreme Court’s verdict against BCCI personnel owning IPL franchises, CSK’s ownership was recently passed from original holders India Cements (the company owned by Srinivasan) to a subsidiary. The new owners then proceeded to value the company at a ridiculous Rs 5 lakh. According to the rules, the BCCI is entitled to five percent of transferring fee when a team passes from one owner to another. For a team that pays each cricketer mindboggling sums, being valued at only Rs 5 lakh is a joke.

In a plot development right out of a James Bond film, it has come to light that Srinivasan allegedly used Rs 14 crore of BCCI’s money to hire a London-based spying agency to keep tabs on certain BCCI officials.According to NDTV, Srinivasan allegedly hired the agency to spy on some BCCI members’ phones and emails. BCCI is apparently going to conduct an inquiry to discover who was responsible for allowing that money to be spent. 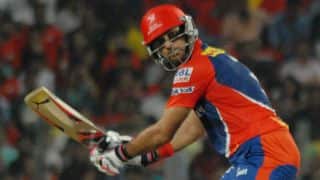