Grant Elliott became an overnight hero for his country when he smashed the winning six to guide the team to their first ever appearance in World Cup final.

It is a known fact that cricket is a demanding game. It requires focus, determination, hard work and sacrifice to reach a certain level in the game and Grant Elliott very well knows that. The New Zealand batsman became an overnight hero for his country when he smashed the winning six to guide the team to their first ever appearance in World Cup final. He top-scored for the Blackcaps with a 73-ball 84 not out. (READ: Grant Elliott: A surprise selection that stood up at the direst of situation)

Talking to the media during the post match conference he went on reveal that he is going to miss his sister’s nuptials. New Zealand will face the winner of the second semi-finals between India and Australia in the final of the ICC Cricket World Cup 2015 in Melbourne on Sunday. Elliott’s sister is getting married on Friday, which he will have to skip to fulfil his national duties. (READ: New Zealand vs South Africa, first semi-final match in Auckland in caricatures)

New Zealand beat South Africa by four wickets in a rain-curtailed match at Eden Park in Auckland on Tuesday. If New Zealand emerge as the winners of the tournament on Sunday, Elliott might just give his sister the biggest wedding gift anyone can ask for. (New Zealand vs South Africa: Pick of the tweets) 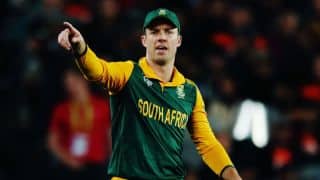