During the match Shikhar Dhawan's wife Aesha Dhawan and Anushka Sharma have seen spending a good time together in the stand watching the match.

India team is touring South Africa for its first overseas series of the year. Anushka Sharma is accompanying Virat Kohli to the tour.

Shikhar Dhawan‘s wife Ayesha Dhawan and Anushka Sharma bond well and were seen spending time together in the stands during the Cape Town Test. They both were seen actively supporting team from the stands.

Anushka Sharma along with Aesha Dhawan, @ritssajdeh and other WAGs at stadium today #IndvsSA pic.twitter.com/JzfrTUHCoL

Ayesha posted a photo on her Instagram with Anushka saying Friends that train together stay together!! Going to miss our training partner @anushkasharma #friendslikefamily #threestooges.

Anushka is expected to return back to Mumbai for her new assignment with Shah Rukh Khan.

Friends that train together stay together!! Going to miss our training partner @anushkasharma #friendslikefamily #threestooges

India bowled out South Africa for 286 on the first day and made 209 in their first innings. 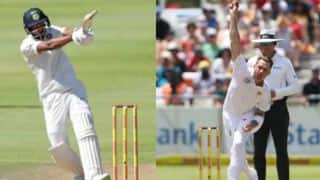