Like every year, cricketing icon Tendulkar installed the idol of Ganesha at his home to mark the beginning of festivities. He had two special guests on this occasion.

One of India’s most celebrated festivals Ganesh Chaturthi is here. The festival, which is marked by arrival of Lord Ganesha in Hindu households of the country, is celebrated with great pomp and show in the state of Maharashtra in particular. Like every year, cricketing icon Sachin Tendulkar installed the idol of Ganesha at his home to mark the beginning of festivities.

However, unlike every year, he had a few special guests at his home, identities of whom he did not reveal at first. He played a guessing game with his followers on social media platforms, asking them to guess who the guests were. The legendary cricketer started the thread by posting a picture of him and the guest seeking blessings of Bappa. He wrote, “Guess who dropped by to seek Bappa’s blessings today!!??’’

While the followers and fans kept making random guesses, Tendulkar finally revealed the identity of his guest after an hour’s time. And to the surprise of all, it turned out to be Jonty Rhodes. The former South African cricketer and a contemporary of Tendulkar, Rhodes has played a lot of cricket with the master blaster. In recent years, their bond only grew stronger after they came together at the Mumbai Indians (MI). Rhodes dropped in at his house to seek the blessing of Lord Ganesha.

Lovely to have the father of baby girl ‘India’ seeking blessings of the Lord! Always fun meeting @JontyRhodes8 pic.twitter.com/xAJyf5mX8t

Besides Rhodes, another very dear friend of Tendulkar, Yuvraj Singh was also present at his residence, though his identity was not kept hidden by Tendulkar, as he tweeted:

It is notable here that Rhodes is a regular visitor to India and is a huge fan of its culture. As a matter of fact, he has even named his daughter ‘India’, as she was born here during Indian Premier League (IPL) 2015. On the other hand, Yuvraj was in Mumbai recently for the launch of his initiative YWC fashion. He shares a close relationship with Tendulkar, whom he considers his friend, mentor and guide. 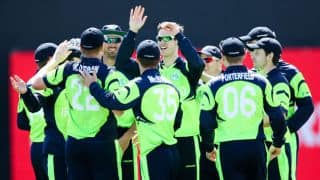