Get the live updates, most hilarious tweets and lot more on India vs Bangladesh 1st T20I at Mirpur.

India will lock horns with Bangladesh in the opening match of Asia Cup Twenty20 2016 at Mirpur on Wednesday. India, the No.1 T20 side, will be on high after back-to-back series win against Australia and Sri Lanka. Despite an injury scare, MS Dhoni will lead the team. The only change for India from the last match against Sri Lanka is the return of Virat Kohli in place of Ajinkya Rahane. Live Streaming: Asia Cup T20 2016, Bangladesh vs India at Mirpur

On the other hand, Bangladesh at home have a very good record but against their strong neighbours it would not be an easy outing. They will take inspiration from the 2-1 ODI series win against India last year.

The pitch wears a green look, very similar to the track we saw in the Under-19 World Cup final a few days back. In the qualifying games, we saw the ball dart around under lights and therefore the home side after winning the toss have elected to bowl.

Expect a thrilling encounter when these two neighbouring nations collide. Rain may play a spoilsport but we hope not. We present you with the best of tweets from the cyberspace.

India defeated Bangladesh by 45 runs. 20 for Bangladesh and those 25 for Dhoni to brag in the press conference #indvsban

Bangladesh batting deep, but looks brittle. No strategy either in chasing down a big score — Cricketwallah (@cricketwallah) February 24, 2016

What’s with these star ratings for cricketers, are they Ola drivers#indvsban — Gaurav Sethi (@BoredCricket) February 24, 2016

Pandya has all the qualities which a typical West Indian all rounder like Andrew Russel or Dwayne Bravo has !! looks vry promising #indvsban — Funnily Serious (@notionalview) February 24, 2016

Shakib run out by a long way for 3. The decisive moment in the game? #BanvInd #AsiaCupT20 — HoldingWilleyCricket (@holdingwilley) February 24, 2016

Ishant would have made this match exciting. One sided win now. — Gappistan Radio (@GappistanRadio) February 24, 2016

Shabbir is a bit of a fighter. With the crowd behind him, and the seasoned Shakib alongside, should expect defiance from Bdesh. #AsiaCupT20 — HoldingWilleyCricket (@holdingwilley) February 24, 2016

Bangladesh is a dangerous T-20 side due to their experience of playing in 20-20 mode irrespective of the format.#AsiaCup #BANvIND — The-Lying-Lama (@KyaUkhaadLega) February 24, 2016

After PSL, Pak players are to play India. It’s a similar situation to what a teacher teaches in class nd asks in exam. U are often screwed. — CRICKBC (@crickBC) February 23, 2016

Once upon a time, they rolled up newspapers and set fire to them to make torches. Now it’s smartphones. Safer. pic.twitter.com/I9Klwwg3ER — Shamya Dasgupta (@shamyad) February 24, 2016

Why Is Nehra Behaving Like He Is Not Nehra? #IndvsBa — Sir Ravindra Jadeja (@SirJadeja) February 24, 2016

Too early to judge, but young Jasprit Bumrah has looked as threatening as any Indian pacer over the past few years. Very promising! #BANvIND — Alt Cricket (@AltCricket) February 24, 2016

Bumrah had been troubling Sarkar for some time now. Finally gets his wicket! Caught behind! #INDvBAN — Royal Challengers (@RCBTweets) February 24, 2016

This is the 4th time MS Dhoni has hit a six on the final delivery of the 20th over in T20Is. No one has hit more than 2 sixes.#IndvsBan — Bharath Seervi (@SeerviBharath) February 24, 2016

The ease and frequency with which Dhoni gets 6, I am sure he must be a champ Ludo player. #AsiaCup — cricBC (@cricBC) February 24, 2016

Dhoni finishes the innings with a six! India end at a good score of 166 #IndvBan — Royal Challengers (@RCBTweets) February 24, 2016

Bangladesh won the first 10.2 overs and the last 1.4 overs – between that they lost the game… #asiacup — Innocent Bystander (@InnoBystander) February 24, 2016

Rohit Sharma’s is the only wicket which is equally celebrated in both dug-outs… — Finger of India (@IndiaFinger) February 24, 2016

Hardik Pandya is hitting the ball so cleanly, you’d think he was searching for a contract with Mumbai Indians #BANvIND — Cricket Gandu (@CricketGandu) February 24, 2016

2 over left. Simple task for Pandya. Make sure he scores atleast 20 runs and oh yes, give enough strike to Rohit for his tons. #ASIACUP — cricBC (@cricBC) February 24, 2016

Commentator on Rohit Sharma: “He came in when India was in a spot of bother”. Dei, avan opener da. — K Balakumar (@kbalakumar) February 24, 2016

Rohit Sharma 2016, the model with all the updates, upgrades, and up yours too#indvsban — Gaurav Sethi (@BoredCricket) February 24, 2016

A 50 is a 50 whether it is against Australia or Bangladesh. Fantastic Rohit! — Keh Ke Peheno (@coolfunnytshirt) February 24, 2016

Bright side to India’s stuttering top order today is that Yuvraj gets some much needed time in the middle. Must make the most of it — Cricketwallah (@cricketwallah) February 24, 2016

India is the only team to play with four players who has 1000+ T20 International runs in Asia Cup and WT20 — Broken Cricket (@BrokenCricket) February 24, 2016

Match should have been played at Eden in Kolkata… Both Teams would have Equal Supporters !!#IndvsBan — Babu Bhaiya (@Shahrcasm) February 24, 2016

Hope Sir Jadeja gets to bat so we know whether he is playing Asia Cup as a batting all-rounder or bowling all-rounder. — Kabir (@The_Sleigher) February 24, 2016

Come on Rohit! At least three sixes off this over, I’ll recommend your name for bharath ratna #AsiaCupT20 — Pramod Ananth (@pramz) February 24, 2016

Should I play the big shots or build a partnership without taking too many chances? Tricky one for @YUVSTRONG12 — Mohammad Kaif (@KaifSays) February 24, 2016

This is quite a battle between India and Bangladesh! #enjoyingit #AsiaCup — Dean Jones (@ProfDeano) February 24, 2016

India needs Yuvraj Singh of the time when bowlers used to celebrate after bowling dot balls to him. — Kabir (@The_Sleigher) February 24, 2016

An indian boy can impress a Beautiful Hot Bangladeshi Girl with the help of his ‘ Rashan Card ‘ . — Hunटरर  (@nickhunterr) February 24, 2016

Wow, this is some surface. Great toss to win. Like in Pune, India reacting by playing a lot of shots — Harsha Bhogle (@bhogleharsha) February 24, 2016

Looking at the scorecard, can’t tell whether India is playing against Bangladesh or Australia of early 2000s. — Kabir (@The_Sleigher) February 24, 2016

This form of cricket where bowlers are not just used as cannon fodder will never catch on… #asiacup — Innocent Bystander (@InnoBystander) February 24, 2016

Dear @BCCI , pls give some money to Bangladesh so that they can create a pitch. Right now there doesn’t exist any. #AsiaCup #IndvsBan — The-Lying-Lama (@KyaUkhaadLega) February 24, 2016

Here’s how the pitch is looking for the #IndvBan match #AsiaCup pic.twitter.com/ZBxkWLl6ZC — BCCI (@BCCI) February 24, 2016

Good luck Team India for the Asia CupI am sure you will have a great tournament and get the desired result #AsiaCup @BCCI — VVS Laxman (@VVSLaxman281) February 24, 2016 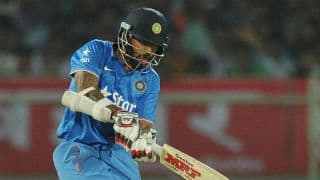