Adam Zampa's six-for in vain as Sunrisers Hyderabad successfully defend 137 to move to the top of the table.

Adam Zampa claimed a six-for, Mustafizur Rahman bowled brilliantly in the death, MS Dhoni almost pulled it off again, Ashish Nehra bowled a sensational final over. However, it call came down to a run out by Yuvraj Singh and a brilliant catch from Naman Ojha. READ MORE: IPL 2016, Match 40, Pick of the tweets: Rising Pune Supergiants vs Sunrisers Hyderabad at Visakhapatnam

Rising Pune Supergiants (RPS) needed 12 from three balls, Dhoni had dispatched a low full-toss for a six, the next ball went aerial behind the stumps and Dhoni looking to complete a two was run out as Yuvraj Singh showed a good presence of mind. Five from the last ball, the day’s hero Zampa on strike. How many times have we seen an outside edge beating the keeper for a boundary? Zampa edged one but Ojha stretched right to nab a blinder. No more drama, no Super-Over, Sunrisers Hyderabad (SRH) had won it by four runs and climbed to the top position in the IPL points table.

There could not be a more disappointed man than Zampa. Less than two hours before that, he finished with 6 for 19 from his four overs, becoming the second bowler after Sohail Tanvir in 2008, to bag a six-wicket haul in IPL.

David Warner won the toss and riding on the confidence that he derives from his bowlers, he elected to bat. It was not the ideal track to bat on as they managed to 137, courtesy Shikhar Dhawan’s breezy start and some late blows from Deepak Hooda. Ashok Dinda bowled well at the start, Ravichandran Ashwin was brilliant in the middle over but it was all in all a Zampa show. ALSO READ: Kane Richardson pokes fun at RCB teammate Tabraiz Shamsi’s tweet after Adam Zampa claims a record six-for

Chasing 138, RPS were forced to the back-foot right at the start when Bhuvneshwar Kumar removed the in-form Ajinkya Rahane for nought. Usman Khawaja was again run out while George Bailey rode on luck to scrape through a 40-ball 34. Surprisingly, Ashwin was promoted to No. 4. Though he played a handy knock, the decision to promote him was baffling, as Saurabh Tiwary had been doing pretty well at the top order. The late overs from Mustafizur Rahman stifled RPS to some extent but the Dhoni factor loomed over as the RPS skipper almost saw them through.

Turning Point: Dhoni had brought down 12 from three to six from two. Knowing his abilities, Dhoni could have pulled it had he completed the second run off the following ball. Yuvraj’s presence of mind sent back Dhoni as he was run out with RPS  needing five to win from one ball. Zampa was not expected to seal it, that too against an experienced campaigner like Nehra. 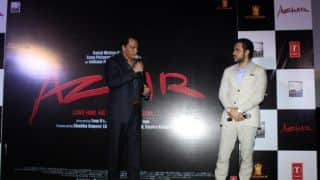