Twitterati went ballistic and reacted to this win by the Caribbean giants, check out some pick of the tweets here:

West Indies came out all guns blazing in the ninth and decisive One-Day International (ODI) of the West Indies Tri-Nation Series 2016 against South Africa at Bridgetown and won the game to chisel their path into the final. West Indies not only needed a win but a huge one as their net run rate was pretty low. They will now lock horns with Australia in the final and the battle will surely be enthralling. Also Read: 14 mind-boggling quotes from Chris Gayle’s autobiography ‘Six Machine’

Before the ninth game West Indies were placed at the bottom with 8 points while South Africa were second with 12 points in their basket. But West Indies turned the tide and emerged victorious in the crucial game.

Batting first, West Indies scored 285 runs in their 50 overs with Darren Bravo smashing a ton. Kieron Pollard, Jason Holder and Carlos Brathwaite contributed with some priceless runs and helped their side to achieve a respectable total. Also Read: When Marlon Samuels almost gave up cricket post the dark days of 2007

South Africa suffered too many early blows and were dismantled for a mere score of 185. This big win not only enhanced West Indies’ NRR but also they earned a bonus point which helped them in confirming their spot in the final. Twitterati went ballistic and reacted to this win by the Caribbean giants, check out some pick of the tweets here:

@WICB_cricket started playing some sensible cricket and playing as a team. #WIvSA

Classy DM Bravo played incredible knock yesterday and took his team to the final of the tri-series . #WIvSA

One team won with both openers scoring 100 & other team as whole lost by 100 runs. #LastNight #ENGvSL #WIvSA

Here we go again, Proteas choked again in a do or die match..whoosh.#WIvSA #Cricket #WIvAUS

While Bravo and Pollard played special knocks, the highlight for me was Shannon Gabriel knocking the stuffing out of SA #PaceLikeFire #WIvSA

Party rock is in the house tonight. Everybody just have a good time #WIvSA

Was never a fan of Sachin as a captain and now I don’t think I’ll ever turn out to be a fan of AB as a captain! #WIvSA

Great win for windies. They r getting better day by day and its good for cricket #WIvSA 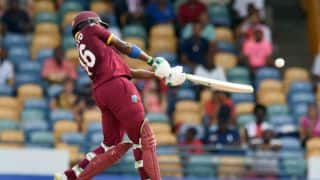