The third Test between India and West Indies saw many dramatic moments as India clinched the series with a 2-0 lead and one match to go.

The third Test between India and West Indies saw many dramatic moments as the visitors clinched the series with a 2-0 lead and one match to go. Sledging has been a part of cricket and very often witnessed on the field. One such incident was also spotted between Darren Bravo and Rohit Sharma during the final day. ALSO READ: Virender Sehwag trolls West Indies team while praising Usain Bolt; calls them ‘Maasoom Memna’

Rohit and Bravo got involved in a verbal battle in a manner, which didn’t serve the purpose of the game. Moments later, umpires and skipper Virat Kohli stepped in to calm the tide down. They have also been fined for this banter after several warnings by the on-field umpires were turned down by the duo. A fine of 15 percent of their respective match fess has been imposed by the ICC. ALSO READ: Darren Sammy receives political backing; St. Vincent & Grenadines PM calls sacking ‘unacceptable’

Rohit and Bravo were found to breach Level 1 Article 2.1.1 of the ICC Code of Conduct for Players and Player Support Personnel. India won the match by 237 runs but this incident certainly made the headlines.

Virat Kohli, Harbhajan Singh and other cricketers across the globe wish India on Independence Day 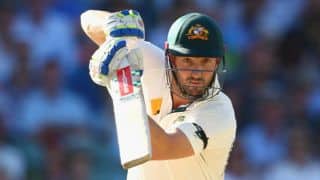