A banter between Indian batting stalwart Virat Kohli and Australian all-rounder James Faulkner is what attracted enormous attraction and created some drama on the field.

Cricket maybe a gentlemen’s game but it has often witnessed infamous instances and sledges on and off the field. Fans and followers usually enjoy such moments as it injects some enthusiasm and the intensity level is further increased.

In the ongoing One-Day International (ODI) between Australia and India, a banter between Indian batting stalwart Virat Kohli and Australian all-rounder James Faulkner is what attracted enormous attraction and created some drama on the field.

Kohli was batting well and smashing each and every bowler for some priceless runs. He was not throwing his wicket away and Australian bowlers were further frustrated. Faulkner who was putting in the hard yards uttered some words to Kohli which was no less than a sledge it seems to which Kohli replied saying, “I have smashed you enough in my life. You are wasting your energy.”

‘Just go and bowl, don’t waste your time. I’ve smashed you Enough in my Life’ – Kohli to Faulkner. pic.twitter.com/rsqMTVU6NM

The exchange of words didn’t stop here, it continued for next few deliveries and everyone was excited with this. However, Kohli was not distracted with this instance and went on to score his 24th ODI ton. He scripted history when he became the fastest batsman to have scored 7000 ODI runs and also to achieve the fastest 24 ODI centuries.

India is in a commendable position at the moment with 295 runs on the board on a pitch where batting is not that easy as compared to previous two venues. One can expect to return the gesture which Faulkner offered when the latter comes out to bat. Aaron Finch dismissed for 21 by Umesh Yadav in India vs Australia 2015-16, 3rd ODI at Melbourne 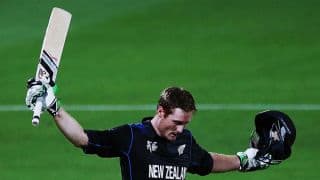