Pravin Tambe proves the point that perseverance can take you far. At 44, when former cricketers have turned coaches, mentors, commentators and administrators, Tambe is living his dream of playing at a high level.

There would be many around the world, cribbing, and complaining of not getting enough chances to prove themselves at the highest level and then there is Pravin Tambe. The Mumbai leg-spinner had not played a single First-Class or List A game before he made his Indian Premier League (IPL) debut in 2013.

Tambe proves the point that perseverance can take you far. At 44, when former cricketers have turned coaches, mentors, commentators and administrators, Tambe is living his dream of playing at a high level. READ MORE: Virat Kohli, Sachin Tendulkar comparison? Yuvraj Singh has the answer for you

Mid-Day reports that six years back, at 38, Tambe was a liaison officer for Mumbai Indians (MI) franchise but he continued toiling in Mumbai maidans and by the time, he was 41, he was in Rajasthan Royals (RR) camp, playing IPL.

He went on to be the highest wicket-taker in Champions League T20 (CLT20) 2013 in which RR were runners-up. In 2014 edition, he bagged a hat-trick against Kolkata Knight Riders (KKR). He claimed the key wickets of Manish Pandey, Yusuf Pathan and Ryan ten Doeschate with clever bowling. Even at 44, he continues to play a crucial role for Gujarat Lions (GL).

His GL teammate Dinesh Karthik tweeted a picture of the liaison officer Tambe with Sachin Tendulkar and wrote:

This man is a true inspiration for every sportsman.I’m a huge fan of his and so happy to be in the same team. pic.twitter.com/Ew6fEOH9jY

Tambe has been a consistently toiled in the Mumbai local circuit from 1996. His form may have been ignored by the selectors and over the 20 years, not even a handful of opportunities came by, but Tambe is now having his time under the sun.

Even this season, he has claimed six wickets at 20.60. GL still have enough games to go and Tambe’s form will prove crucial. Inspiring, indeed. 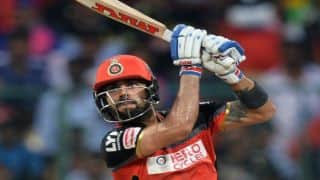