Yuvraj’s father and former Indian cricketer Yograj Singh lashed out at Indian skipper MS Dhoni, accusing him of having “personal issues” against his son, which has led to Yuvraj’s ouster from the side.

A day after Team India beat Pakistan in the ICC Cricket World Cup 2015, Yuvraj Singh was bought for a whopping Rs 16 crore in the Indian Premier League (IPL) auction. Reacting to that, Yuvraj’s father and former Indian cricketer Yograj Singh lashed out at Indian skipper MS Dhoni, accusing him of having “personal issues” against his son, which has led to Yuvraj’s ouster from the side.

The buck doesn’t stop here and in yet another attack of words, an emotional Yograj cursed the Indian captain of being “penniless one day” and also said had he been a media person, he would have “slapped” Dhoni.

As reported by IBN live, speaking to a Hindi News Channel, Yograj said, “Dhoni was nothing. He has become a God in cricket just because of media. Media has crowned him as a great which he never deserved.”

“There was a time when he had nothing but today he sits in front of media and rips off the media persons. He laughs at media who has given him so much hype. He laughs at the Indian people who clap when he scores a run. Honestly, if I were a media person, I would have slapped Dhoni right there”

Yograj, who is also an actor and was appreciated for this role in Bhaag Milkha Bhaag, compared the Indian limited-overs captain compared Dhoni with the famous antagonist from Ramayana, Ravana. He added, “”Dhoni is arrogant. The way Ravana’s proud came to an end, Dhoni will also suffer some day. He considers himself much above Ravana.”

“I feel really ashamed when other cricketers come and tell me about Dhoni. Earlier, I used to think that people must be cribbing about Dhoni due to jealousy. But when the cricketers told me about him, I think I have never seen a terrible person like him ever in my life.”

Yograj’s anger stems down to the fact that his Yuvraj was not picked for India’s World Cup squad earlier this year, despite the latter being in good form in domestic cricket. Also, Yuvraj was the man-of-the-tournament in India’s World Cup triumph in 2011. Along with Yuvraj, four other heroes from that campaign missed out – Virender Sehwag, Harbhajan Singh, Zaheer Khan and Gautam Gambhir.

Though Yuvraj was adjudged the man-of-the-tournament, Dhoni was awarded the man-of-the-match in the final against Sri Lanka in Wankhede Stadium. Dhoni, who usually batted at number six, came at number five in that game, which was Yuvraj’s position. Yograj criticised that move and compared that to India’s semi-final loss against Australia in the 2015 edition at Sydney Cricket Ground (SCG).

“In the 2011 final, Yuvraj was going to bat but Dhoni stopped him and went to bat and became a hero. Why didn’t he bat at No. 4 this time? Why did he go at No. 6? If he considers himself as a great then he should have batted at No. 6 and guided India to a win against the Aussies,” fumed Yograj.

Yograj didn’t stop there and went on to curse Dhoni, is India’s most successful captain and one of the best players in history of One-Day cricket. “There will be a day when Dhoni will be left to beg and become penniless and would not get any favour,” added Yograj. 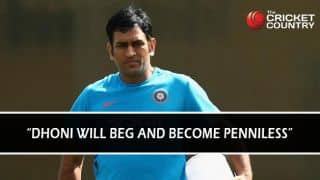